I packed the gate post bits into the car, and took off to the Metal Fabricators, I arrived just before midday, which was the time we had arranged, but as I went out of the door the girl had said 2pm, however the baseplate was ready.

From there, I moved on to the Welder, I explained to him what I wanted doing, fully expecting it to be tomorrow or Saturday before the post was ready, however he said he wouldn't remember what piece went where, if he didn't do it immediately, so he cleared his bench, and welded it there and then, what a guy, thanks Don Rueben! I then asked him for the price, I know...I should have asked before, but he never overcharges, he told me the price and then asked if I thought he was cheap, I told him with a smile, that I am happy with his work, but had Marcela been with me, it might have been cheaper, he smiled!

Once it had cooled off enough to put in the car, I headed off to by the 'rustproof' paint, and concrete fixers, after lunch, it was back home and after cleaning the post, I gave it it's first coat of paint. 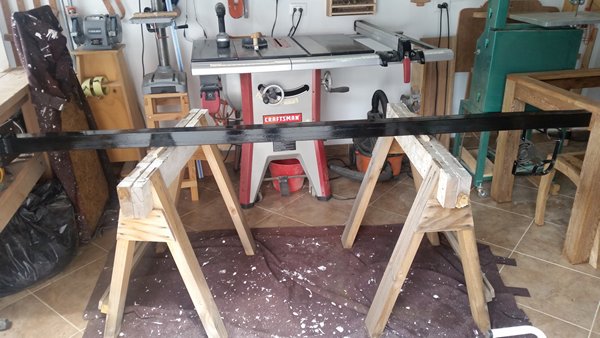 It's hard to see the detail, it will be easier once it is outside and erected. I am hoping to get the second coat done shortly, but if not, first thing in the morning, and then get the post in position. I thing the hardest job will be scraping out the concrete, where the base plate will go, to get it level, but we will see.
By Phil Sale at May 26, 2016