Away from Projects for a While!

Last week, I put a plug on the welder, kitted myself out in the safety gear, and decided it was time to get started...I still do, but I haven't, and before you think I have gone totally loopy, let me explain.

I had read all the instructions, had the correct rods for the machine, and had a pile of scrap steel, which I cleaned with the grinder, then tried to strike an arc, for those non welders out there, that means to getting the machine working  :)   I kept trying, all the videos said to pretend I was striking a match, I would get a flash, then nothing! and 5/10 the rod would stick to the steel.

I decided I was getting nowhere, and to do more research, this time asking friends on Lumberjocks, and the consensus seems to be one of two problems, either I need to find thinner welding rods, or the electric cable run from the house to the workshop is too long for the size cable I used. I have a horrible suspicion it could be the latter, I will spend another week or two practising first, but if I can't overcome it, I will have to get the Power Company in, to run another cable to the workshop. Here, our meters are in the street, on a pole, so it would be taken from there, which is only about 10m to the fuse box in the workshop. At the moment my power is going from the meter, 30m to the house fusebox, then 20m back to the workshop fusebox, although, it has had no effect on any of my other machinery, this may be the problem here.

In the meantime I have another distraction... 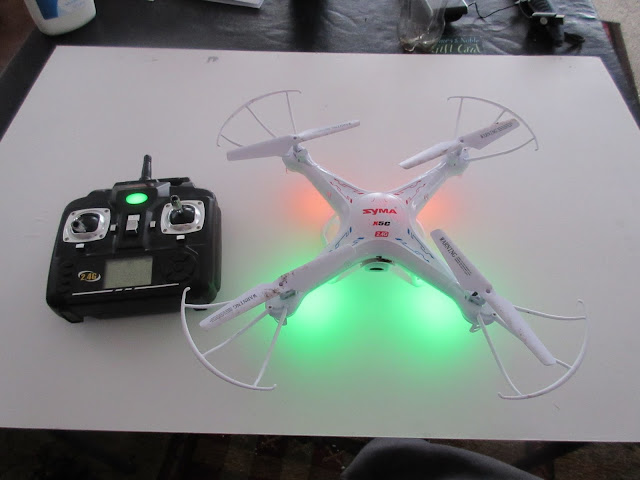 A camera drone / quadcopter, a big boys toy!!! I am taking all the advice on this one, because the cost of replacement or parts here is silly, so for now, I am learning in my workshop, I only picked it up yesterday, but it is certainly addictive, so far it hasn't got over a meter above the ground, and I think it will be a week or two before I venture out into the garden, where the cover over the swimming pool will be the next area, giving it a soft landing. It is probably just as well a battery only last six or seven minutes, although I did buy two extras!!

I have encountered one problem, and that is Pépe, he has taken a terrible dislike to my new toy, and keeps sneaking into the workshop when he thinks I am not looking to try and attack the drone, I may well have to shut the door, unless I want it chewed up!

Hopefully when eventually I get up in the air, I will be able to post some video footage of the area!
By Phil Sale at June 12, 2016