A Bit of Progress!

I need more exercise, and there was nothing for it, but to bite the bullet and buy a second hand Treadmill. 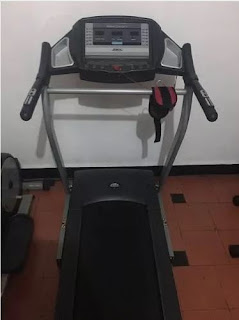 This was the photo advertising it, I was hoping this would be the answer to my problems, but maybe not... day two on the machine, I buggered my knee yet again! I had only walked just over 3km in 30 minutes, I am hoping that by resting it today, I will be able to go back on it tomorrow, but as it feels at the moment, I am not sure!

Anyway, yesterday afternoon we had been out to buy some more Azulina, or maybe better known in Europe as Plumbago. I planted some nearly two years ago as a hedge on the roadside, and it has been brilliant. The Bougainvilleas I had planted as a boundary in the garden, failed, all bar one, they didn't like the ground, and the crickets ate them, so I had dug them up and needed a replacement, I am hoping the Azulina will do that. 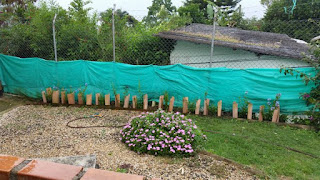 So today, I dug over the border, fertilized it, and planted the new plants, however immediately I finished, Pepe cocked his leg, and Tito decided to race through them, so they needed protection!

As it happened I have a stock of Spanish roof tiles, at the back of the house, so I 'planted ' two on each plant, and hopefully, they will now survive. 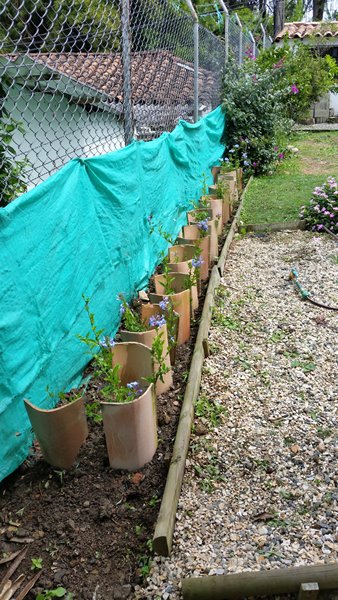 Unlike those at the front, which I clip nearly every week, these will be allowed to go much higher, the old Finca, you can see in the picture, is about to be demolished and replaced with a two storey building, which will block out much of our view down the valley, so I want to be able to block out the new building, this should do it. The hedge will be on two levels, height wise, because the area to the left of the building, I will keep trimmed, to give us what is left of the view!
Posted by Phil Sale at 21:17