My health seems to be keeping me out of action, for the forseeable future anyway, there is a light on the horizon, as I have actually made some progress with my spine, also the Orthopaedic Surgeon has decided that he is going to operate on my knee, once my back is sorted out, it is all a case of when...

Marcela did my 6 weekly cancer check, a couple of weeks ago, and found new lumps and bumps, I have a routine check up with the Dermotologist in ten days time, so hopefully he will confirm one way or another!

I tried to do some gardening on Friday, and ended up flat on my back afterwards, it is all very well Marcela and others telling me to just do a little bit at a time, but, as they say...Time waits for no man, and that goes for weeds as well!

Today, I decided that I could make a start on general maintenance on my trailer, the wood is starting to look pretty weathered, and I don't want it to rot 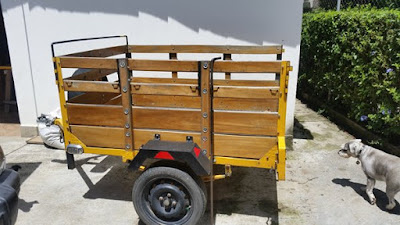 I started with the tailgate. I removed it from the trailer, took off the trailer sign, and home made number plate, then sanded all the wood, but rather than varnish it, I decided to use car engine oil, I have some old 'new' oil that has been lying around for a while, and I wouldn't use in the car, 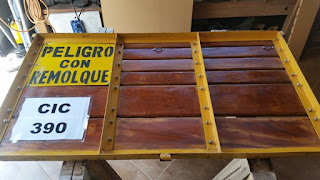 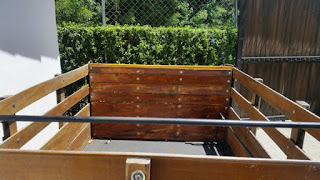 after it was well oiled, I cleaned up the trailer / remolque sign, and made a new laminated number plate, that is now complete, I just have the other three sides to do...hey! no rush.

I have got to do some woodwork later this week, Marcela is opening a shop, hopefully next week, over near her Mum, and I promised to make the display racking, I'll post on progress!
By Phil Sale at July 31, 2016