Another Project bites the Dust!

It took me a couple of days longer than I thought, after working 12 hours on Saturday, I woke up on Sunday, and wanted to curl up and die, between the pain in my back and feeling ill, I was fit for nothing, so spent the day in bed, I said it was as a result of the heat, Marcela said it was because I didn't stop to eat!

Yesterday, I had a better day, mainly because I went to visit my Colombian Accountant, and as a result of the taxes I pay back in the UK, along with the expenses working on the house, I have again had a nil income tax return in Colombia, so I was happy to pay her fee, but I have been warned that, I am likely to have to pay something next year, as there is a big tax reform coming in later this year, and it is unlikely I will get away scott free again

This morning it was back to the shop, the work was more or less completed, I just had to add some trim, tidy up a bit of the work, put one of the glass display cabinets together, and install the alarm, I arrived at 7.30am and left at 11am...Job done! 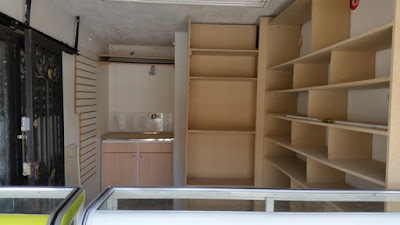 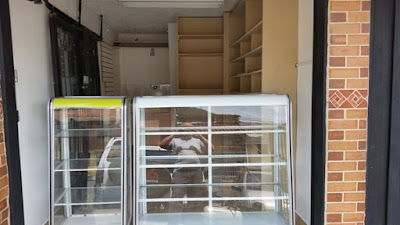 Now it is all up to Marcela and her Mother to make it work, although from the interest shown whilst I was working there, I don't think they should have much trouble making a success, of what will be a Stationary store / Papelaria and Costume Jewellery / Bisuteria.
By Phil Sale at August 09, 2016