This is definitely not going as I had hoped, I had the intention of removing the sides in one piece, and restoring then, but after I had undone the nuts, I found, the trailer had not been built to be maintained!... sounds stupid, I know, but it's correct.  The sides have been bolted to the main frame, in such a way, that to try and remove the bolts would have split the boards, so after a struggle I re-applied the nuts, and sanded the side down in situ, just removing the wheel arch, and strap holders. 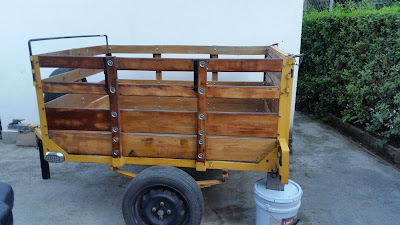 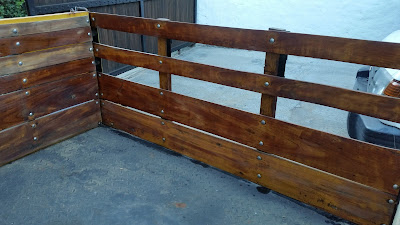 Once I had finished sanding the old finish off, I again used engine oil to cover the side. it looks a lot better, and should last a while. That's half the trailer done, I'll get the rest done as time allows.
By Phil Sale at August 18, 2016