The title does not do this post justice, but if I wrote what I am actually thinking I would have to ban myself!

Health wise, I know a bit more, but I am no further forward towards a resolution, my Orthopaedic Surgeon, has now said he is going to operate on both knees, but due to my age, they wont do a replacement, because hopefully I would still be alive when they had worn out, so he is going to try and clean up the joints, and thinks that should last me a few years, I am having an MRI on my right knee on Tuesday, this is the latest part of my body to collapse, and probably more painful than the left one.

I had a bone gammagraphy to try and resolve the problem on my spinal column, but it doesn't reveal anything, now I am waiting to be referred for tests on my colon to see it that is putting pressure on the spine, but my family Doctor is away, and I can't see him until October 7th, I wont go to another Doc, because I know I will end up being sent elsewhere, so I will just have to grin and bear it for the time being.

The reason for this post!  Last week I cut back our Dame de la Noche shrub, as it appeared to be dying back, and it is just as well I did, because last night, I discovered subsidence under the pathway leading to the house, there is a problem with this further away from the house, but I put that down to the path having been laid on the grass without preparation, maybe I was wrong, this is definitely more serious. I started by poking a stick under the path, and there was only air! 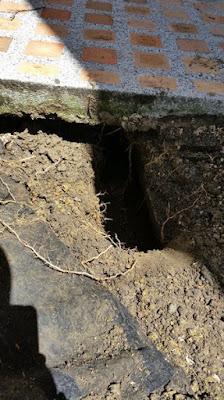 It goes down nearly a meter and back at least the same again, I have dug the hole out from both side of the path (now the animals have a tunnel), makes it easier to assess the situation, and to fill with concrete! 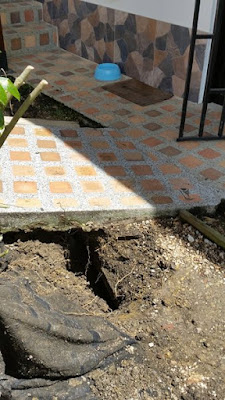 Tomorrow it is down to the Deposito first thing, to order 20 sacks of sand/gravel mix and 4 sacks of cement to start with. I will have to have it delivered, if only to save my back for an hour or two.
This isn't going to be much fun, walking stick in one hand, shovel in the other...bit of an exaggeration, but you get the idea. Hopefully they will be able to deliver in the morning, it depends on their regulars. Then I can guarantee the rest of the day will be spent flat on my back!
I just hope this is the only major problem, and nothing more serious is happening under the house, if it is, then I will have to rely on my insurance policy...Colombian Builders!