I had my MRI on  my knee, and unfortunately the right one is, to put it bluntly, knackered, so I have been put in for an operation, and I am just waiting for a date.

This week I went to see a Neurosurgeon regarding my spine problems, he has ruled out surgery for now, he states if they fuse the discs, the problem will just move further up my spine, there is nothing they can do about the damage, but he believes in time they can eliminate the pain, and I can't ask for more than that! Firstly he intends to do another Spinal Block, but in a different location.  Made it easier, understanding every word he said, he qualified in Canada and lived there for two years, so spoke fluent English.

So back to reality, I have been doing bits and pieces, nothing worth a post in itself, but I thought I would share a couple of them with you.

Firstly, more work for Marcela, she wanted a bill board to put outside the shop, easy enough you would think, but it had to be light enough for women to carry in and out, and yet big enough to be able to attach a plastic sign describing the services, and believe me, Marcela will not use a couple of words if twenty will do!!!

I decided on 100cm high by 50cm wide for the boards, these I cut from some 6mm plywood I had in stock, to make this rigid, I cut the legs into 2"x 2" sections from some 2x4, and then braced them top and bottom with a strip of 2x4. The board was then attached with brad nails and glue. 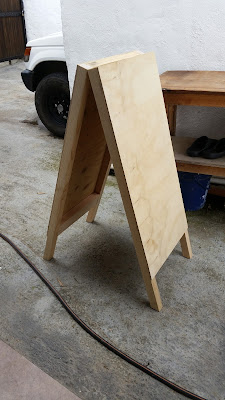 Here the two sides are just propped together to get an idea of what it was going to look like, having cut 22.5° angles on the feet.

I then painted the two sides white, which when dry, I joined with three strong hinges on the top, and electric stapled two lengths of rope between the two sides to keep the boards upright. 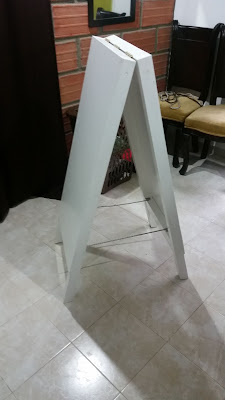 Marcela ordered her signs to go on either side, and now it is sat outside the shop!

That done, our neighbour has opened a Fast Food joint, next to our finca, I wasn't happy at first, but so far, no problems! and we have put our differences aside...for now. They have some good ideas, but not a lot of cash to implement them, they came up with a good idea for signs outside, cutting lengths of 6x1 1/2 pine and threading them on some hemp rope, but they spoiled it by writing the signs on paper and gluing it to the wood, so wanting to keep occupied, I offered to do some pyrography, saying I would do it for free, nothing else to say. Within an hour the board were down taken off the rope, and offered me in a pile. 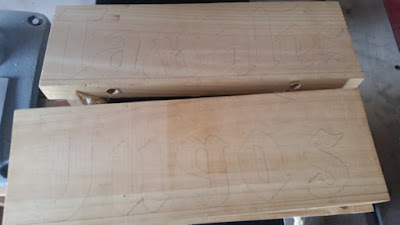 Hard to see I know, but I drew around some cardboard stencils I had bought recently for another job,
and then out came my wood burning kit. I haven't used it for a while, and it was nice to get back into the swing of it. 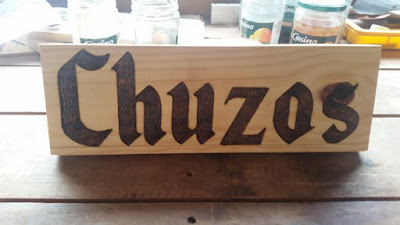 I did a couple, and took them for the Daughter to see, as she is running the place, I didn't want to spend all day doing it, only for her to decide she didn't like them, but she was over the moon, so I kept going, and finished the last one off this morning. 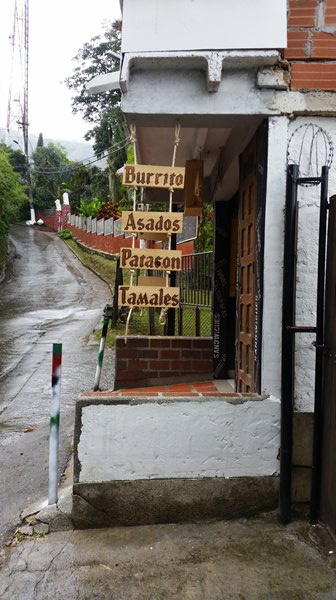 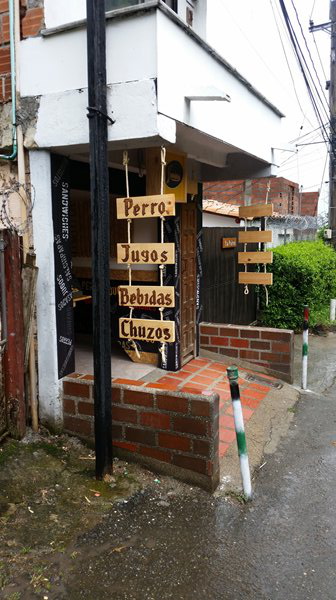 Certainly looks a lot better than what was there before, and it looks as if I may get some paid work out of it, so not bad for one days work!
By Phil Sale at October 13, 2016