Boy am I glad that yesterday is well and truly over! Of course it was my day to go to Bogota and collect my Visa.

I went to bed early, having set the alarm for 2.50am, but sleep was long in coming, as is the way, when you know you have to get up! I ended up getting out of bed at 2.30am, having a quick shower, and leaving. I got down to the bottom of the mountain, and stopped to get my money out for the two toll roads I was going to have to negotiate, whilst in my bag, something made me look for my cedula (Colombian ID card), I couldn't find it...panic! I had my passport and all the documents for the visa, but if I was stopped and asked for my cedula, even with a passport I could be in trouble.

I rang home, and asked Marcela to check my daily bag, in the office, but she couldn't find it either, so I raced around the motorway one way system, and back home. We both search high and low, I asked Marcela to double check the bag I had had with me...nothing! we even checked the washing basket, in case I had picked it up with my dirty washing the night before. I was just about to give up and rely on my passport, when I remembered that in the bag I had had with me, there was a 'secret' pouch, I had put my cedula in there so it wouldn't be stolen...Dimwit!!!

So at nearly 4am, I set off again, my poor old Montero has never gone so far, so fast, since I bought it, I will have to check the Government system for the next couple of weeks, in case I set off some hidden speed camera, as believe it or not, the speed limit is much lower here than in Europe, another money spinner!

I pulled into the first private Airport car park I had used in the past, and as I was reversing into a bay, the engine died, and wasn't going to restart anytime soon, I thought maybe I had burst a radiator pipe, as the temperature guage appeared not to be registering. I spoke to the owner, who said it was out of the way, and to forget it, so I did, and they took me to the airport.

Fortunately all went smoothly at Medellin Airport (Rio Negro), I had booked in online, so it was a quick walk through security, and I was at the gate, time for a coffee. We took off and landed on time, so far so good.

I sent Marcela a message to say I had arrived safely, and then went out to get a Taxi, it was buzzing,
I was approached by a smart man in a suit and tie, neatly pressed "Taxi Señor?" I said yes, expecting him to walk towards one of the yellow perils, but he started walking off in another direction, so I stopped him, as I am fully aware of the dangers of not getting in an official taxi, so I asked him, and he told me he was in one of the private 'white' taxis, and the fare would be 70,000 COP to my destination, that seemed relatively expensive for the trip, but it had been three years, so I decided to go for it.

We went to the car park, he had a licenced Hyundai minivan, almost new. As is always the case, they ask why you are there, and as always, I lie... I make out that I am going in an official capacity, and they were expecting me, I then took a photo of the registration plate, and messaged it to Marcela, it's just a security thing we do, in  case something is amiss, I told him what I was doing, but said it had been sent to the office so they knew I was coming, he accepted that. I knew most of the route, but as we drew closer, the traffic was at a standstill, so the driver took a diversion, which threw me a bit, but when I saw the sign for Avenida 19, I knew I was nearly there.

I arrived about 8am to find a queue outside the Ministerio de Relaciones Exteriores, normally this is for people looking for other services, and Visa applicants go straight in, but yesterday this was not the case, so I joined the queue, and waitied as they let people in as others left, I passed the airport style body scanner, and went up to the office, and found it jam packed with sixty or more persons, I thought this was going to be a very long wait.

I picked up a yellow peril outside the door. 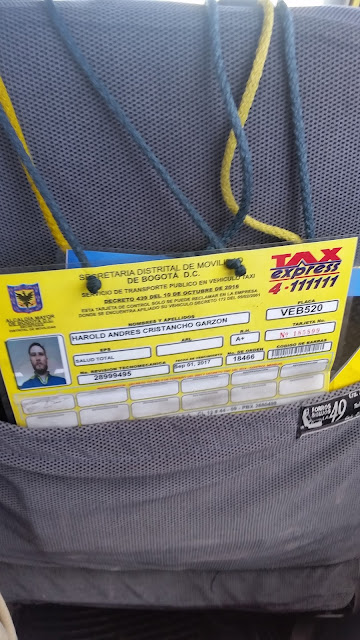 From Avenida 19 to the Centro Commercial Gran Estación, the meter was spinning and it cost me 102.000 COP nearly 50% more than the private taxi, and I was only half way back to the airport, to make it worse he was a miserable Git! he asked me where I wanted to go, and then chatted on his phone the whole way there, only stopping to ask me which entrance I wanted. I messaged Marcela, and she immediately replied 'Gringo', which is probably right, but how they alter the meter speed I have no idea.

A friend on Facebook,  Carlos Lopez Prieto, happened to see an entry I had put whilst waiting my turn, and contacted me, I didn't realise he lived in Bogota, we tentatively arranged to meet subject to the time I had to spend waiting, so once at the Mall, I made contact, and he said he would meet me for lunch.

I really appreciated him going out of his way to come and meet up, and it is nice to meet people face to face. We chatted as we ate, and an hour or so later we went our separate ways, it was great to meet him, anyone in the Bogota area who needs an English Teacher, he is your man, almost fluent in British English!! hahaha 😄. If you read this Carlos...thanks!

It was then into another yellow peril, this time with a Mexican driver, very friendly and I was to find out why! (unfortunately I was knackered, and forgot a photo this time), the meter spun even faster and for the shorter 2nd half of the journey it was 120,000 COP.

I challenge anyone to work out how it cost me 70,000 one way and 222,000 COP the other! I certainly wouldn't use the yellow perils again, either the Local Government is allowing all out extortion, or the Taxi Drivers have worked out how to fiddle their meters. If I had to go again, I would book a private taxi ahead of time, or as the cost of the flight was 300,000 COP, the total cost would have been more than me using an Agency in Medellin to act for me, and less stressful.

Bogota Airport Domestic terminal has certainly been upgraded since my last visit, at least this time we had comfortable seating, I had taken my collapsible walking stick with a seat handle, expecting to have to use it, as last time I had to sit on the floor.

However LAN Airlines decided to let the side down, at the last minute they changed Boarding Gate, to give themselves breathing space, we were then boarded where we sat for another half an hour, and then moved out onto the field for another half an hour before taking off. The Flight Attendants made an attempt at English on the announcements, but to be honest their standard of English was terrible, I understood more of the Spanish! Another thing that horrified me was that they didn't give Parents with babies lapstraps, if there had been turbulence, the babies would have gone flying across the cabin.

The flight is only 55 minutes between Medellin and Bogota, so I nodded off. Back on terra firma, I rang the car park to collect me, and within five minutes I was on the way back to the car. The same man who took me to the Airport, collected me, so came with me to my car, shining his headlights on the front, I opened her up, and checked the radiator, the water was fine, so I tried starting her, and to my relief, she started first time. I think there is a temperature sensor somewhere, and it must cut out the motor, something I will have to sort out, either the sensor, or what is triggering it, I believe it is the sensor, because the water temperature guage barely moves off cold, maybe it's the thermostat, I honestly have no idea, not being mechanical in any way, shape or form.

As for the car park, great value at 10000 COP for the day, and excellent service, I would highly recommend them, also being so close to the Airport helps.

I had an uneventful trip home, arriving about 8pm, and glad to be there.

So how did I feel about my day? well...my Visa turned out to be very expensive thanks to the Yelloe Perils in Bogota, but I have my Visa for another five years and gained a new Friend. Now I have to go through the process of obtaining a new Cedula (ID Card), I have fifteen calendar days, so I did the online part this morning, but their online appointment system doesn't work, so Marcela rang and booked me an appointement at Migración Colombia in Medellin on Tuesday, another bill to pay, and then a few weeks later I should have that, as it runs concurrent with the Visa.

After a lovely morning, early afternoon, it started clouding over, and we had a lovely partial Rainbow, so I guess at some stage the heavens are going to open again. 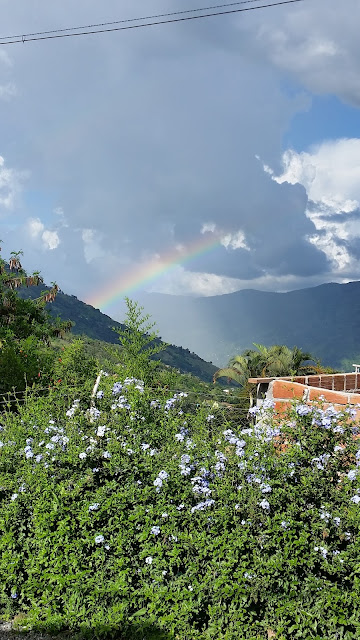