One of the things that really sends my blood pressure into orbit here in Colombia, is the fact that everybody tells you what you want to hear, not what is reality... I'm being polite!

The neighbours who built the Agricultural and Building Supplies shop and apartment next door, in place of the one storey finca that was falling down, have now taken down the remaining old building at the rear, seen in the photo below. We could no longer see that building as the Azulina has grown to the top of the fence.

They are now in the process of building a replacement, but on shaky foundations, I have been watching them closely over the last few days, and they have been replacing the base, as they have taken the other down, wall by wall, leaving the roof until it had to come down, so the base is in three or four sections with no reinforcement, and only about 3" deep. For some reason they intend to still have the roof sloping towards the main building, apparently they are going to put a gutter between the two. 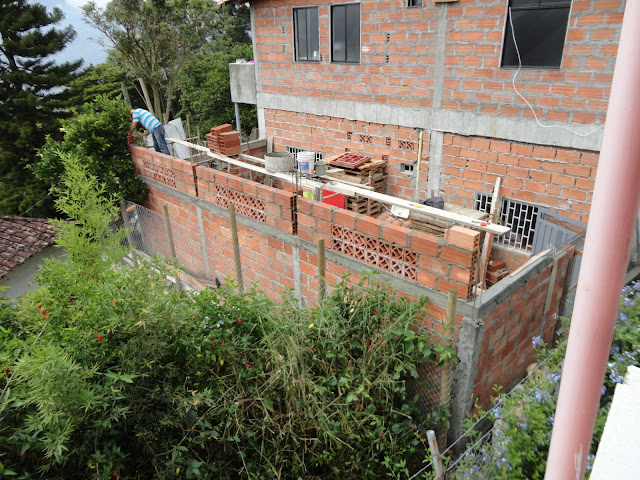 I went round to ask how high it was going, to be told they were completing one more course and that was it, which would have made it approximately the same as the old one, but... we are already two courses higher, and I have now been told there is another one to go, then the roof on top, that means more view blocked, and no support for the extra weight, I can see this being a real problem for us if the weight causes movement, as you can see from the photo, this new construction is spitting distance from  our house. There is no point in asking at the Planning Dept. they wont do anything, except go and talk to  them, leaving with extra cash in their pocket. All we can do is keep our fingers crossed, that if anything happens the house insurance will pay out. At the first sign of problems, I am putting the place up for sale.
By Phil Sale at June 23, 2017