Could have gone Better!

Thank goodness, that's another Holiday week-end out of the way, if the last two week-ends are anything to go by, we have at least got our message over to the owners of the Finca de Recreo, the music was turned down well before midnight, and we were able to sleep, but that didn't stop them making up for it during the day, still it's an excuse to go out for lunch, and escape the ear bashing for a while. We just have one more this week-end, then a little respite, hurrah!.

I spent most of the week-end working on my generator, I needed it for today, but nothing I did would make it start, it's my fault, I usually start it every couple of months to ensure it is working, but it has been probably five months since we last needed it.

A neighbour tried to get an Engineer to come out for us on Sunday,, but they were having none of it. A Fiesta is a Fiesta, and nothing gets in the way of that, so Sunday and Monday were out!

This morning at 8.10am EPM turned up as expected, and the electric went off, I just had to pray that the freezers would hold, especially in this heat, until work had finished. I went off for a routine Doctors appointment, but did not get back until 11.30am, I stopped on the way back to ask an engineer who had serviced my brushcutter if he would look at the generator, he said he would, but gave me some suggestion to try out first, they didn't work, so I took the generator down to him, he pulled the cord twice, and it was humming away, I just wanted the ground to open up under me!

Anyway we loaded the generator back into the Montero, and I headed off to Bello where I had some other business to attend to, as a result I met up with Marcela for lunch in a Supermarket Cafe, which unfortunately was rubbish, and then I headed home.

EPM were still working on the lines, but were very affable moving their cables, so I could get the car in through the gate.

I hooked up the generator and connected two extention cables, one to the chest freezer and the other to the fridge-freezer, and left them to re-freeze.

I was under the impression, EPM were tidying up the cables on each post, but they must be preparing for the new constructions on the mountain, wanting electric, because new main cables have been added. 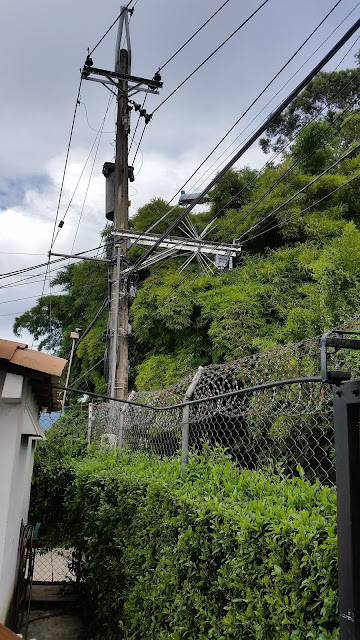 Instead of just the post, it has now grown an arm, it looks hiddeous! but I guess in a week or two, like before, we wont even notice it. However one neighbour is not happy, because they found his illegal cable tapped into the main supply, and they are not letting him away with it, how or when he got so far up the post to connect it I have no idea, he must have had help, and done it at night.

Oh well, that's it for a day or two, I have to get up tomorrow at 3am and head for the Airport and my flight to Bogota to have my visa put in my passport, so hopefully that will be totally uneventful...hahahaha!  some hope.
By Phil Sale at June 27, 2017