It has been a really strange week, with not much to show for it!

Yesterday I did some cleaning around the house, since I am here on my own most of the time, with the dogs, it is only right I clean up, then I headed down town, did some shopping and had lunch.

I have found a Restaurant in the town square, nothing fancy, all local food, hot and well prepared, the fact that it is cheap as well, doesn't hurt... I will have to do a Review, when I take some photos. Marcela has been telling me off, because most times I am out, I pick a dish with frijoles, which are beans, I would describe them as kidney beans in a sauce, and Marcela says they give me wind, however a friend on FaceBook commented the other day, that she has been suffering with tremendous wind as a result of eating salad, and as there is a spoonful of salad on my plate, I think that must be the cause, so I'll leave the salad and eat the beans! hahahaha.

Today, we were woken at 4.45am by a fireworks display on a commercial scale, it went on for ten to fifteen minutes, and they were not domestic fireworks either, they seemed to be going off all around us, but I found, when walking the dogs, that they were from a Finca de Recreo a bit higher up the mountain, they were playing what we call Druggies Music... electronic music on a loop, it drives us nuts, and they are obviously there for the week-end, they came prepared, because they have a huge marquee in the garden, so that they are not driven indoors by the rain, looks like being a fun week-end, even the double glazing didn't cut them out, although it did reduce the volume a little, tonight it looks as if we may be on the phone to the Police, and see if their 'New Code' works, as they can now gain entry and cut the power to the offending property,  I doubt it.

After breakfast, I went to see our neighbour at the Building Supplies, and did a deal with him, I bought some sand and gravel, and paid him to take it and fill the deepest potholes down the road, as Marcela had trouble getting home last night. Normally I would have bought them, put them in the trailer and done it myself, but with the state of my back, I wasn't risking it. Most weeks, someone has building rubble and fills it as they are passing, but there had been none recently. 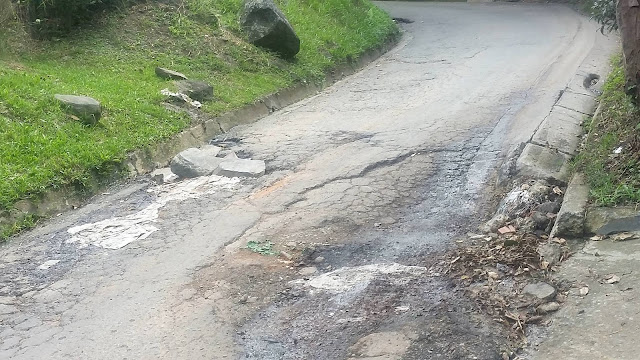 This photo I took last week when  I made a report to the Town Hall, the holes were full, but it soon gets kicked out again by spinning tyres.

At 9am, it was off to the Vets for Pepe to have a check up, following his visit last week with a skin problem, it's not the easiest of tasks, as Tito can't be left on his own, so I have to take them both when Marcela is working, Tito is strange, because he wants to be with me, at the same time he doesn't want to be there, and is a pain in the... fortunately the Vet is very understanding, and this morning was quick. Pepe has improved rapidly, it is a reoccuring problem, apparently common in Schnausers here.

On the way home, I came across our neighbour stood at the side of the road by our giant potholes, whilst another man we know, who has a local small transport firm, was busy filling the potholes with rubble...typical, after I had paid, anyway, they assured me my material would be used, to top off the holes, although I suspect not all of the five sacks of gravel and two of sand would be used, they probably ended up in the back of Ignacio's lorry!!!, but at least now Marcel can get home again for a few days at least.

It looks like we are suffering the same as everyone else, affected by climate change, supposedly we are in summer now, we never see rain in summer, but the last three days we have seen plenty of it, at some point in the day, no two days have been the same, I think we have had enough, time for real summer now. I need to be able to work outside, I have some rendering and lots of painting to get done, neither of which I can start at the moment. Maybe someone's trying to tell me something...with the political turmoil back in the UK, maybe I should be putting more pension aside if the currency rate is going to crash, I'll keep my fingers crossed that it doesn't have too big an effect, that is certainly one of the drawbacks of living abroad.
By Phil Sale at June 09, 2017