It seems strange to be back after five months away from Blogging, but in a funny way, I was missing it.

Unfortunately due to problems with my knees and spine, I have been limited in what I can do, there has been some improvement, at least in my knees, so I am a bit more mobile, and as summer has arrived again, it is time to get some of the annual jobs done.

There have been ups and downs along the way, so those experiences may help others avoid the pitfalls that can hit you as an Expat here, if you are not very careful.

At the end of last year, I made the decision that I was going to apply for Colombian Nationality, not that I have any intention of giving up, or feel any the less connected to my British Nationality, but I have no intention of moving from here, and want to get more involved in Colombian life, also it would mean not having to keep applying for Visas.

That being said, as with all things I undertake, I spent months researching this, not only the procedure, but how it might effect me afterwards, especially financially, the advise I have, is that it will make no difference. I went with Marcela to the Passport Office at the Gobierno de Antioquia (Regional Government) and sought their advice, they told me, that as I had been married for over two years there was nothing to stop me applying immediately. I would have to make the application to Central Government, there would be a number of background checks, both here and abroad, and then I would have to sit a two part exam, covering just about every topic you can think of, that in itself made me think again, because at my age, studying is not easy matter, but I decided, that "In for a penny, in for a pound", I would go for it.

I started the studying first, geography, history, politics etc. and when I was feeling nearly ready, I applied and paid, then two months later, I received an email, the application had been rejected...I was gutted, the explanation was not 100% clear so I rang Bogota, and spoke to a nice lady, who explained, that it was nothing personal, I just was not yet eligible, the Gobierno de Antioquia had given me the wrong information. I had to have had a permanent resident visa for two years before I could apply, and I am still on a 'Temporary Marriage Visa', which is due to expire in December this year. This meant, not only had I wasted months studying, but I had also lost the not insignificant sum of money I had paid for the process...I wasn't happy, but there was nothing I could do about it.

I have decided, not to wait until December to renew my Visa, changing it to a Residence Visa, which lasts five years, I am going to start the process this week, I couldn't do it any earlier, because both myself and Marcela have undergone surgery, and I had to wait until we were both back on our feet, as this process will mean a trip down to Bogota. I can apply online, but once granted, I have to go to have the visa put in my passport, I could pay for someone to do that for me, but last time, it was cheaper for me to fly down myself, and back again in the day. By starting the process now, it should be cheaper still, as flights at Christmas time are silly prices. We'll see if I can pull this one off without making a hash of it!

My last post before hanging up my keyboard, was about the new building alongside us, it turns out it is a Building, and Agricultural Suppliers, there is a bit of noise, but nothing over the top, occasionally I have run ins with them over using the road as their personal dumping area for materials, and 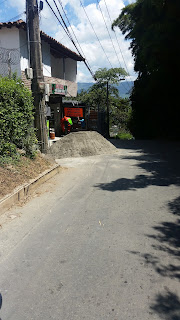 the parking of their own vehicles, which can cause access problems, 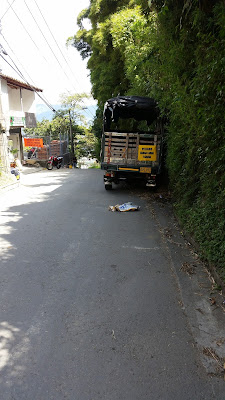 also they use the passing area, as their personal car/lorry park, making it difficult for vehicles to pass, and then cause damage to our property. but on the whole, it could have been a lot worse,

The neighbour's daughter on the other side, has closed the cafe, and it is now up for rent, so what that will be is anyones guess, I am hoping that Jorge, who owns it, and lives above, will have some consideration as to what it will be, but I doubt it, as long as it brings in money for his daily 'weed' habit, he won't care, the only leverage I have, is that he uses me as his local Bank when he runs out of funds, so upset me, and the Bank closes.

The only other update..I can think of for now...is that the Finca alongside and at the rear of us, was sold, and supposedly was no longer going to be rented out as a Finca de Recreo, that has changed, a sign went up last week advertising it, probably because the new Owner discovered it was going to be damned expensive to renovate without the additional funds. Thank goodness we had the double glazed windows put in our bedroom, they really do help cut down the noise levels, I wish I had had it done sooner.

That's it, I think... now it's time for a shower, and off to town, to pay bills, and do our shopping.