Today I had an appointment with an Internista in Estadio, Medellin, I need to lose more weight to help my knee joints and my back, I am limited in what exercise and how much I can do, and diet hasn't worked, I followed all the recommendations, five small meals a day, three medium meals a day, and finally in desperation I had a small breakfast, a normal lunch and then nothing except liquids, but there was no change.

My Family Doc, decided that left me with the option of medication, and referred me to the Internista.

Having said that if I had known earlier, what I know now, I would have cancelled the appointment, because last week, I had an appointment with my Accountant, and she recommended a homeopathic remedy, tablets called 'Dolor End Forte', we bought some, and the same night, I slept pain free, like a baby, and have done since, long may it continue. 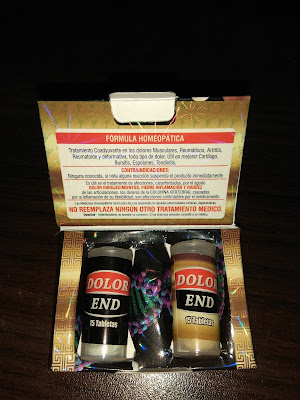 I have also cut my coffee consumption by two litres a day, and started drinking green tea, which is supposed to help weight loss. For those of you who know me, you will know I have had a life long aversion to any type of tea, but I prepare this and put it in the fridge, I have to admit to liking it!

Anyway, back to the appointment, we arrived early as there was no traffic, it turned out that the people before me, had failed to turn up for their appointments, but the woman would still not see us early, she sat drinking coffee, tea or whatever. Marcela had worked out from her name that she was Venezuelan.

I was called in, and she immediately made a bad impression, by refusing to read the clinical records of my GP, or the Specialists when offered them, her reply..."I know my job". She obviously didn't, she went on to say that she wasn't even considering medication, she wanted me to do 90 minutes exercise a day, and go on a diet. I started to lose it, I had been sent to her just because those two things were either out of the question or didn't work, she went on to say that if they didn't work it would be surgery and a gastric band. That was the final straw, I let fly at her, and said I had no intention of having surgery, I rather only live for the next five years and be happy, than the next twenty and be miserable. I started to get up to leave, having told her that she was wasting my time, Marcela stopped me, and the Doctor realised that she had blown it, saying she would try and refer me to another Internista, she can forget that, I'm seeing no one else.

The only good thing to come out of it, was that she issued an order for hormone tests to see if that was my problem, I will have the test, but will see my GP with the result, I am certainly not returning to see that Quack.

Hopefully now I am relatively pain free, I can up my own exercise regime, that and the green tea, hopefully I will start losing weight under my own steam.
By Phil Sale at July 17, 2017