Wednesday night we received a call from my Father-in-law, Henry, to say he had managed to get a lift, and was coming down to visit us from Caucasia, panic...I knew the shops were shut yesterday, being Independence Day, and the food stock was low to say the least, as Marcela has been working all week, and was not returning Wednesday, as she was going to visit friends with her Mother and Sister yesterday.

Henry was due to arrive sometime about 1pm, I managed to find some pork in the freezer, so it was pork with gravy and rice for lunch, I started preparing this at 6.30am yesterday, as there was still much to be done. As it turned out I got through it all quicker than anticipated, made his bed, cleaned up, and lunch was done by mid morning.

I decided to do some painting, this time it was the first floor of the house, or here they would call it the second floor, it very confusing at times, again what we in the UK refer to as the ground floor, is the first floor here!!!! I was able to get going on this easily because I was working on the balcony. I started by brush painting all the edges along the roof woodwork, around the windows, and where all corners met, then out came the roller.

At 12.30pm I decided it was time to clean up, by this time I had received a call from Marcela to say Henry had had to wait for his lift, and it would be nearer 2.30pm before he arrived. I cleaned up, had a shower, and as I had not heard from Henry, had my lunch.

Eventually he arrived, armed with fruit and cheese, amongst this fruit was a new one on me, Zapote! 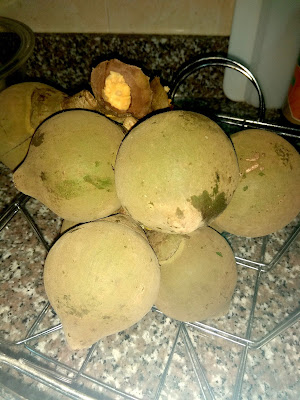 They certainly don't look very appetizing. Henry broke one open for me, it has an orange stringy flesh, and in my case about three plum size stones (seeds) in the middle, I had to be honest, I tried it, but I didn't like it. It says on the internet that the juice is more refreshing than drinking coffee or tea, I had to drink a load of green tea to get rid of the taste.

This morning I finished off painting the balcony area, then showered, and took Henry with me, to do the shopping (At least now we have food!!!),  we had lunch whilst we were out, now we are waiting for Marcela to return from work.
By Phil Sale at July 21, 2017