It was an early start today, I had to go into the City to collect some medication, they couldn't issue locally, I was dreading it, I have had to go there a number of times previously, Colsubsidio at AlmaCentro in Medellin, it was a horrible branch of the Pharmacy, but the main one, it was small, no air-con, some times you had to go outside, and risk losing your place, so as not to faint, it was packed solid, and you were waiting ages.

I arrived, to find it shut, and then to my surprise, learned that it had moved into the Mall, 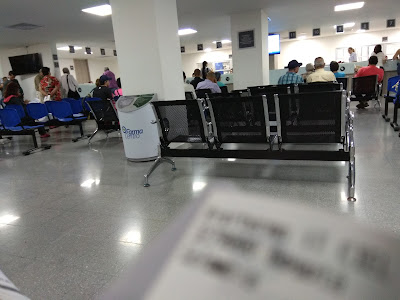 A new location, just off the carpark, mega times bigger than the old location, air-conditioning, loads of seating, and customer service points, much more efficient, and quick, despite the queue being back to the door for initial registration, I was in and out in twenty five minutes or less. Well done Colsubsidio, about time, but worth the wait!!

From there I had to return to Niquía, to renew my SOAT, which is the obligatory third party personal insurance, for my Montero, it only covers injury to other people, not vehicles, and is the only insurance you are obliged to have, this insurance alone is on a par with insurance costs in the UK, but it works in reverse, the older your car the higher the insurance, and no discount for no claims, so for the Montero which is now 21 years old, it is three times higher than that for our 2015 Renault. However we still pay for vehicle insurance, on top of this, in my case third party, and for the Logan total cover.

From there I went back to Copacabana to stock up on our diminishing food supplies, and then stopped of at Mi Gallo Tuerto on the Autopìsta, about five minutes from home, to have brunch, but it didn't happen, I placed my order, received my 'gaseosa' (bottle of pop!) and then nothing, after half an hour, I cancelled my order, paid for the very expensive drink and left. In three years, this is the first problem I have had, I classed myself as a regular Customer, before they raised their prices, I used to go two or three times a week, but no more!

Back home, I put away my not so frozen purchases, and prepared to wait for my neighbour Jorge Ramirez to come and do the welding, I waited, and waited, then Marcela arrived home, and she being Marcela, went to see if he was home...he was, and said he was busy with something else, he has now been told that if he doesn't arrive in the morning, then he had better have the cash he owes me. I have also told him that 'Bank Philip' is now closed, and if he needs cash to go to the friends who take priority.
By Phil Sale at August 15, 2017