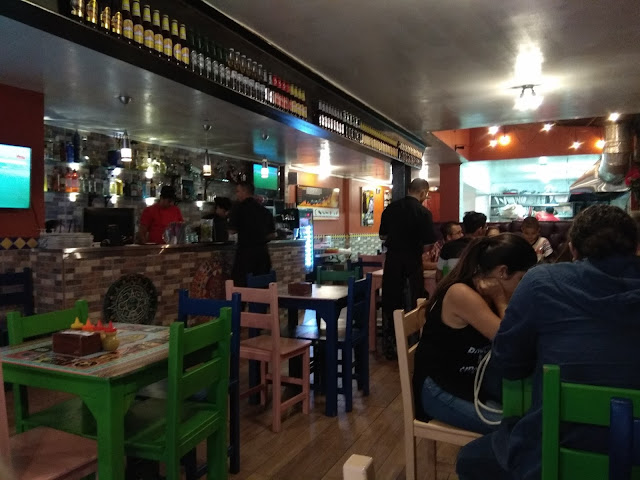 We had reserved a table for 5pm when they open, which is when this photo was taken, and why it is relatively empty, people are pouring in behind me. 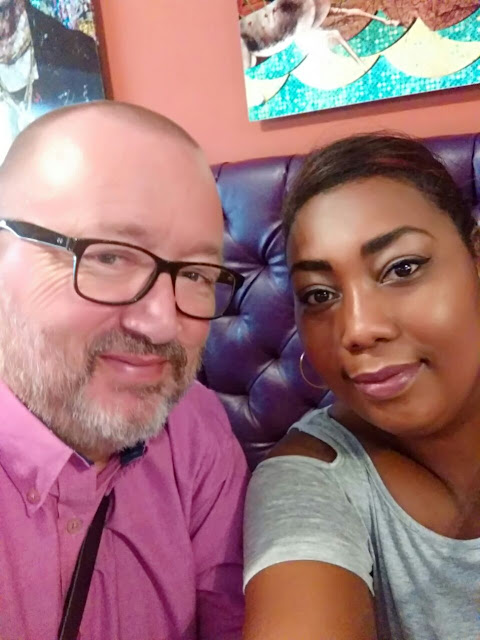 Suffice it to say, we had a lovely meal, and in the next day or two I will put an entry on the Restaurant review page!

The gloss was slightly taken off the evening, when we arrived home, to receive a phone call from Diego to say he would be at the house at 8am today, to sort out the leaking drain. There went my lie in!

This morning I was up at 5.30am, took the dogs out, and then fed them, had my own breakfast, then started to arrange things so Diego had a clear start when he arrived, which he did at 8.30am, but I won't criticise him, as he comes on the bus, and then has to wait for a motorcycle taxi to come up the Vereda.

We started by making one hole in the side of the house, where the existing pipes enter to join up with the old system, but it was dry, there was a little damp, but nothing you wouldn't expect to work it's way up through the earth.

Diego then opened up a second hole, but we couldn't even locate the pipes in that one, so we opened up a third hole, where the old kitchen used to be, luckily Diego was careful how he opened that one, as the pipe was set into the wall, out of site, but again everything was dry.

I then had a brain storm, and suggested to Diego that maybe the problem wasn't with the pipes after all, but the Septic trap, where all the 'clean' water is filtered before heading off in the drain. I thought maybe the floor of the trap was not sealed. However when we lifted the lid, we ran some water and Diego spotted the problem immediately, the render around the exit pipe had worn away, and the water was heading out of the trap into the earth and not the tube.

Diego, being Diego, dived straight in, not that it was that dirty in there, as I had cleaned it out and changed the filters only a couple of weeks ago, but he didn't wait for the offer of boots! The pipe wasn't seated correctly at the join about a foot into the outside soil, so he ripped it out, fortunately I had some pipe and couplings in stock, but it wasn't an easy job, and Diego spent a couple of hours lying outside the trap with his upper body down inside, it can't have done him much good. 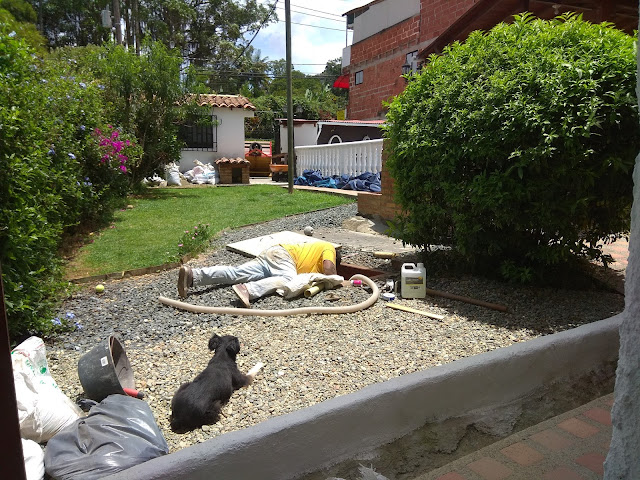 Pepe and Tito adopted Diego, and fortunately he was as soft with them as we are! as you can see, Tito was never far away.

There wasn't room for the both of us to work in the trap, Diego had to open up a big hole in the side of it to access the old pipe, which meant a lot of cement going in, that posed a problem, because all the water from the kitchen, the wash basins in the bathrooms, and the showers goes into the trap, so Diego's idea that we not use them until tomorrow, just wasn't practical.

As you can see from the above photo, I found an old piece of flexi pipe, with some temporary couplings, Diego rigged that up between the entry and exit pipe to direct the water straight through the trap, until the cement has dried. 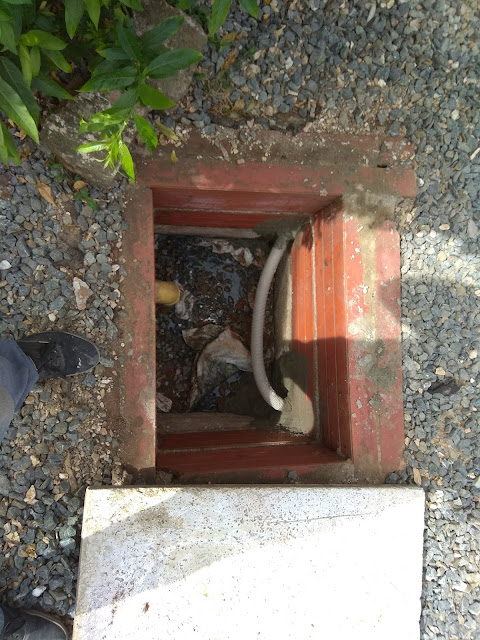 Tomorrow, I will remove the flexi pipe, and straighten out the filter, hopefully the problem should then be resolved.

Whilst Diego was doing that, I cut a the concrete blocks, to fill in the holes in the side of the house 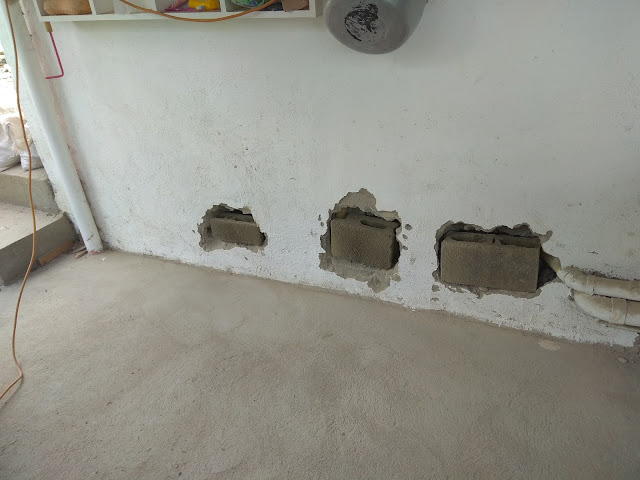 we then used some natural stone taken out earlier to pack around them, and Diego cemented them in place. After which I told Diego to pack up, and I would finish off, he had a cracking headache from working out in the blazing sun, albeit he had refused the offer of a hat. I thought he had done more work, than we had both anticipated, so I paid him extra, and he left happy.

I had lunch, then cleaned up, and mixed some more cement render, and gave the holes a top coat, which I then sponged off to match the surrounding wall.

All the sacks of rubble were moved to the parking area ready for removal, the drying area brushed clean, then the washing machine and other bits replaced, by which time by back felt as if it was broken.

It was time for a shower, and a siesta!

The second job of putting in a new floor in the drying area, will have to wait for a while, Diego is self employed, and has to take work where he can find it, so thinks it will be a month before he can return to do that job, which will take four or five days...no problem!
Posted by Phil Sale at 19:04