If you are fed up of reading about Septic tanks, now is the time to move on, I'm certainly fed up of working on them...lol

This morning I was up at 5.45am, I wanted to work before the sun came out. I took the dogs for their walk, I would have had no peace if they had missed out on that, then I fed them and had a cup of coffee.

Finally it was time to get started on the septic trap, I needed to remove the sacks I had in the bottom as a filter and then all the pebbles, that I thought were just part of the filter system on top of the base.

Firstly I re-inserted the flexi-pipe, from the entrance pipe to the exit pipe, unfortunately just as I was doing that, Marcela woke and having been to the bathroom, decided to wash her hands, I managed to move out of the way just in time!

Diego was right, there isn't much room to work in the trap, in the end I removed the pebbles by hand, I had a pair of long industrial rubber gloves, so it wasn't a problem, it just took some time. After a while I realised, there was no bottom to the trap, it was a filtered soak-away. I realised this after working out that one of the pipes in the trap is the overflow from the septic tank. 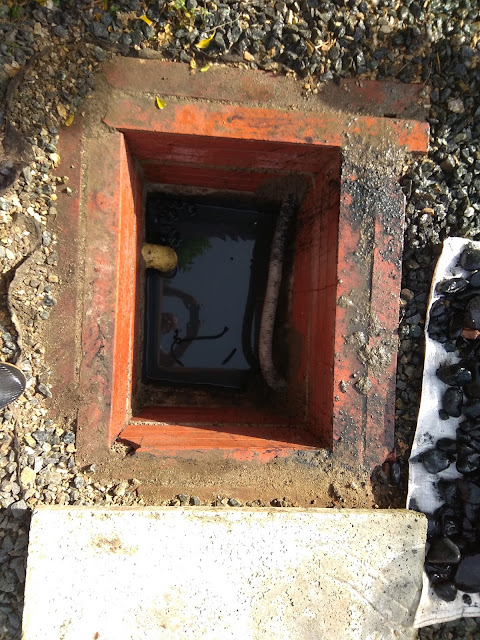 The yellow pipe on the left, it comes out of the wall, and disappears downwards, how far I never did find out.

After a while I decided to stop, Marcela had had her shower, and the water had bypassed the trap in the flexi-pipe, and come out of the wall in the lane below, so we knew the problem wasn't the trap.

It was time for a test, I mixed up some diluted white paint, then went down into the lane and removed the drain cover, 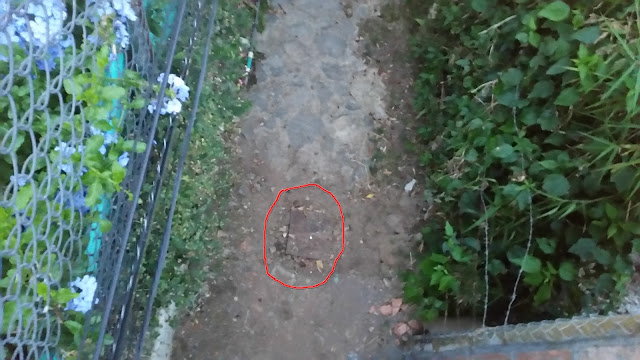 it was full of white water, and there was also some coming out under the wall. I believe that the blocked drain, was causing a backup, the water had to find somewhere else to get out, and did so, somewhere along the pipe, the question was how to unblock the drain, if indeed it was possible.

The drain pipe is in fact 2" flexi-pipe, so it is ribbed, it goes down the lane, through the neighbours garden and on down into the brook. I have to be licensed for this, and that is renewed every ten years, every one in the road should also be licensed, but I believe I am the only one, the authorities can't be bothered to chase up the others. It is not an ideal system, but it only applies to grey water (taps/showers/washing machine) and it's not environmentally friendly, plans are being drawn up at the moment to put us all onto mains drainage, but at the rate things happen in Colombia, I will be dead and buried by the time it is implemented.

No solids go down the drain, but the access point is just dug in the soil, so any earth or stones could have been dislodged and entered the pipe, or the neighbour could have damaged it further down the line. I fetched my fish wire from the workshop, with the intention of poking down the pipe to see if I could find the obstruction, but before I returned, I filled the outside sink with water and let it go. On returning to the drain access, the obstruction had cleared, at least something had gone in my favour! 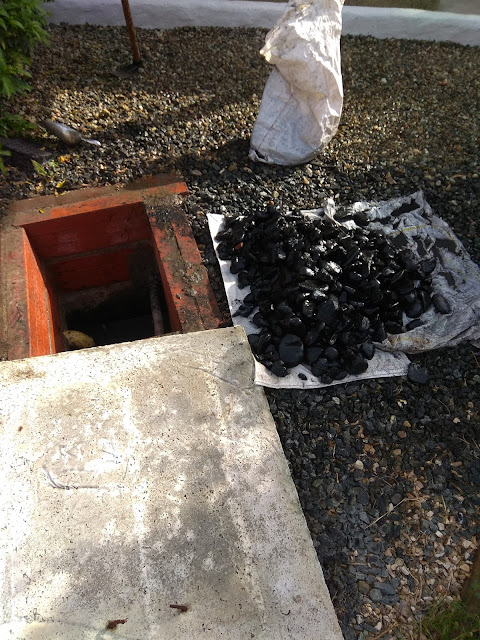 Back in the garden, I washed the pebbles using the hosepipe. and replaced them in the soak-away, keeping a few back. On top of these I put two sacks to act as a filter for any solids  (rice etc.) that got through, and the few retained pebbles went on top, to stop the sacks floating.

I removed the flexi-pipe, and put a layer of sand on top of the brick wall to act as a seal between the trap and the concrete lid, hopefully that will retain any odours. 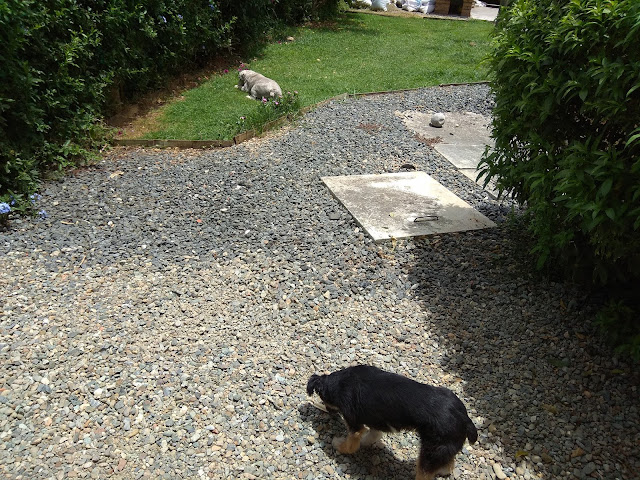 Now we have to see what happens, I'll give it a week or two. I am hoping that as the obstruction is removed, water will pass the damaged area and go where it should, but without the flexi-pipe, it will have to fill to the level of the exit pipe first, so with some evaporation, and the soak-away, I might be saved, if not, I will have to scrape away the gravel, between the trap and the hedging on the left of the photo, and dig down a meter to the pipe, and follow it back towards the hedge, until I find the damage or bad connection, and repair it, I really don't want to have to do that.

OK...cancel that, I have just been downstairs, having had the washing machine on, and the lane is covered in water. I lifted the trap top, and the water is not at the level of the exit pipe, which leaves two options, the first, Diego has not done a good job of sealing the exit pipe in cement, or and I think this is the more likely option, there is damage to the pipe from the house to the trap, but not under the house, under the gravel part. This is still a big job, but not as deep as going for the exit pipe, I don't think it is a job for this week.

It was time for something completely different, I have had enough of water leaks for a day or two, so it was time to experiment. The engine compartment of my Montero was filthy, I had been contemplating taking it to a car wash, and have them do it, but unless you are there when they open you can be waiting four or five hours, before they even start, I wasn't that desperate.

Last week I watched a video on YouTube where the man advocated using Tyre Cleaner Shiner Foam, I had been unable to find the foam version here, but I had found the spray, and once on, you leave it to work for a few minutes, then use an air gun, to blow the foam/liquid off the engine. The idea being that this product is used for rubber, so it is no going to damage electric cables, water pipes or anything else.

Oh well, in for a penny in for a pound! I started up the compressor, to ensure I had the means to dry things off if it went pear shaped, then I got started. I have to admit to being a bit hesitant at first, but what the hell, I sprayed everywhere, then blew it dry. 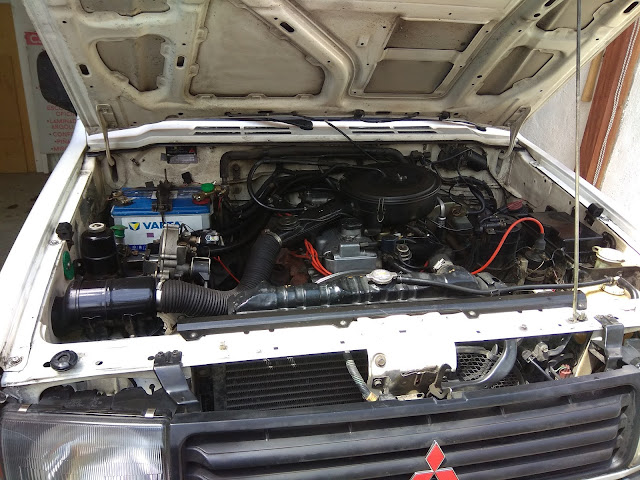 It's hard to see in the photo, but it is certainly an awful lot cleaner, and all the plastic, cables, and tubing are sparkling.

Yes it definitely works, but I will continue hunting for the foam, I think that would do a better job, and be easier to see where you have sprayed, then I would also be able to do the underside of the bonnet, as the foam would stick, unlike the liquid.

Email ThisBlogThis!Share to TwitterShare to FacebookShare to Pinterest
Labels: air gun, flexi-pipe, in for a penny in for a pound, pear shaped, septic tank, septic trap, soak-away, tyre cleaner shiner