After my last post, Marcela received a 'threatening' message from one of the Witches (sorry... Daughters) below, as they had heard our washing machine going, and run out to check on the water leak, and found it still leaking, she had also had a go about our hedge overgrowing their lane, and they would hack it back.

Those of you who know Marcela, know that you do not threaten either of us, and she replied somewhat forcibly, explaining that we had been working flat out to try and resolve the leak, so far without success, and that was the reason I had had no time to do any gardening, they were not to touch our hedge.

As a result, I went to the lane, and checked, there were a few strands of hedge that might have caused a problem to the lads that ride horses from their stable, but nothing horrendous, however to avoid any further comment on the matter, I got out the ladder and shears, and cut it back to the fence, and cleaned up.

I shan't be rushing to sort out the leak now, they can get stuffed, I told Marcela that if they want war, I'll give them one, and officially. They let their dogs, and they have a pack of them, roam out in the road without any form of control, contrary to the new laws, they also have a house that is falling down on their land, which was taken off them by the Local Authority, in return for sheltered accommodation in town for Grandma, so in effect it now belongs to the Town Hall, and yet they continue to rent it out, despite being told not to. Those who live in glass houses shouldn't throw stones!

However, following her reply to the Witch, apparently she received a more conciliatory reply offering assistance if needed...

Yesterday, I decided to do some gardening, so pruned the Dame de la Noche which was starting to overgrow the path, cut the grass, and trimmed our side and the top of the hedge. 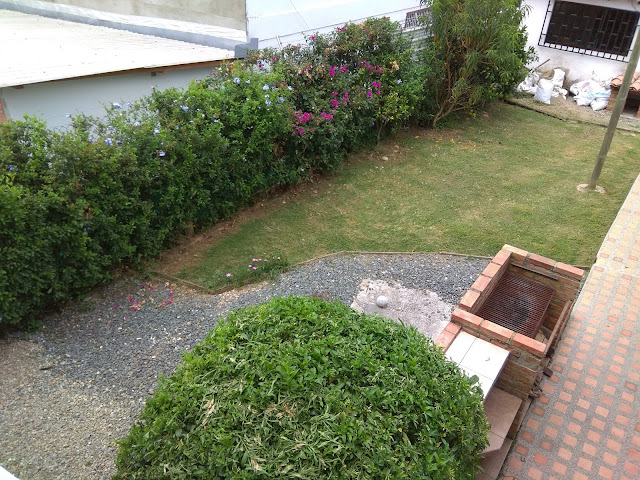 That done, I trimmed the hedge bordering the road, both inside and out.

Once finished, I nipped down the motorway to collect my generator, which I left last week for an overhaul, the Boss was in the workshop, he is friendly to say the least, and I received the usual "Felipe! como estás"  yep here, it is easier to give the Spanish version of my name to people, they have no idea how to pronounce 'Philip' despite it being almost identical. Anyway, the generator now starts first pull, and the service only cost £8!

I decided it was time to clean my car, and I don't just mean give it a wash, which I did in the morning, but to bring it back to life. The Montero is an old car at 21 years, and it is only used for banging about locally, and hauling the trailer, but that's no excuse not to keep it looking good, and it was looking far from it. The front of the car looked yellow, not white, and that was mainly due to the mechanics who have worked on it, they place their oily hands on  the paintwork, and don't clean it off.

I had some rubbing compound, and used that, I had tried liquid cleaners, but they didn't touch it, only taking the surface grease off. The rubbing compound did the job, so far I have done the two front wings and the bonnet, but need more compound, so will buy that whilst I am out today. It is looking much better, and after a coat of polish it looked better still.

That was enough for the day, I wrapped up about 3.30pm,. which is late for me.

Now it's time to head off out, do some personal shopping, I need a new pair of shoes, the pair I use daily I bought in Spain, and they are about to fall off my feet, despite searching far and wide I am having problems finding replacements, so the search goes on!
By Phil Sale at August 26, 2017