On Tuesday afternoon, we had someone else come to quote on the jobs I want doing, repairing an underground pipe leak, and replacing the outside concrete floor at the side of the house, then tiling it. Diego was spot on! he gave us a quote for each job, there and then, on the basis that I am supplying the materials, and will labour for him. He told us that the estimate of materials needed had been over estimated by the other guy, he believes on purpose, so I'm glad he never bothered to quote.

The damaged pipe, Diego wants to break through the wall of the house from outside, and see if he can spot the damage and repair it, before resorting to taking the pipe to the rain water downpipe, that really made me happy, a bit more work, but better a proper job!!

My neighbour Jorge turned up at 11.30am yesterday, with a big industrial welder, his is elsewhere on a job, and was the reason he hadn't been, just a pity he didn't speak up earlier, the welder he turned up with was 220v and all my system is 110v, however I have the 'new' 110v welder, I have yet to learn how to use, and he could have used that on Monday and saved himself some grief, so I dug that out, and my gate / door to the tool shed is once more intact.

I started on my new medication yesterday, neither diets nor exercise have helped me lose weight, so my Doc has resorted to medication, but now I have to be careful what I eat, as anything with fat or grease, could result in disastrous and immediate effects...enough said, so far it hasn't been too bad, but it does mean that I can't eat my favourite Colombian food which is chicharron, to compare that in the UK would be to describe it as roast pork crackling with the fat and meat still attached, the thought of not being able to eat that for three months, doesn't bear thinking about!

This morning, the first job as always was to walk the dogs, it had been raining over night, and was quite fresh, but there was a strange phenomenon, I have only seen here. 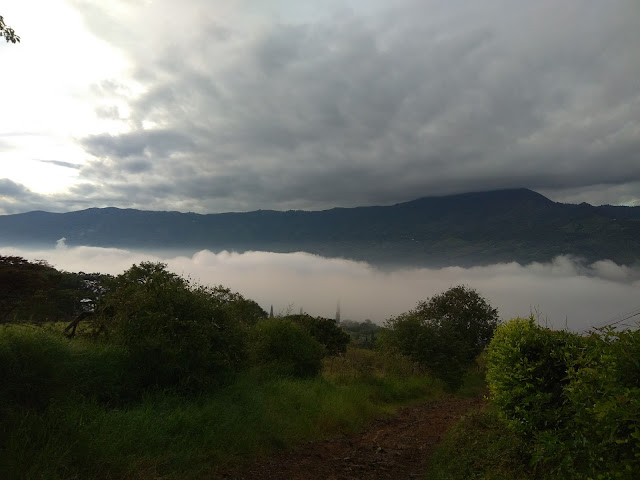 clouds above and clouds below, with the mountains in between, weird. The clouds above must have been the rain clouds moving away, because not long after, out came the sun and it was baking hot.

After breakfast, I went into town to drop off another complaint at the Town Hall, I think I keep them in business! and then I went over to Bello to do a job for Marcela at the shop. She has a Laptop on the front counter, with a security cable to the wall, so it can't be stolen, only, for the last two days, the same lad has been back twice, and been seen trying to remove the screwed in eye hole from the wall, so I replaced that with, an eye hole expandable bolt, let him try and remove that!
By Phil Sale at August 17, 2017