This morning it was beautiful when I took the dogs for their walk, the sun was out, but it was still fresh

however it was obvious even then, that it was going to be a stonker today, so I enjoyed the climate for what it was, before the heat descended...I was not disappointed!

I decided to do a bit of work before heading out to the shops. Last week I cleaned the engine bay and the outside bodywork of the Montero, yesterday, I decided it was time to clean the inside of the bonnet (hood), I had never done it, and it has always looked a disgrace, since the day I bought it, two years ago. 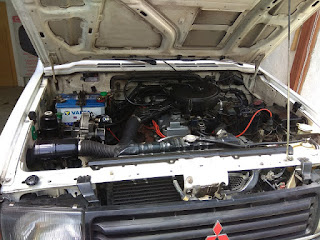 So using the same technique, I set to with rubbing compound and lots of elbow grease, as well as my sack of rags.

After two hours, it was looking very presentable 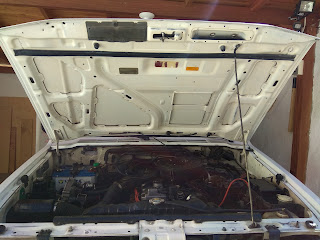 a nice creamy white, it will never look as white as the exterior, which has had a respray at some point, it's just a shame I can't whip the egine out, and clean all the bodywork in the engine bay, but that's not going to happen. I am pleased with the finish, now I just need to polish it to protect the bodywork, but that's for another day.

After a shower, I headed off down to town, what a relief, after yesterdays fright, the car ran fine, no problems at all as a result of the work on the air conditioning system, it must have just been a glitch, whatever it was, I don't want any more, although I know that with this car, that is just wishful thinking.