I have to admit that it took me a couple of days to recover from Sundays epic project, age is definitely catching up with me.

However I haven't been completely idle, I had to replace a tap in the downstairs bathroom, I think some dirt had travelled the system and clogged up it's insides, I wasn't able to clear it, so went off and bought a replacement. Now our water system is working 100% again, and everyone is happy.

I then made a new platform for my boys 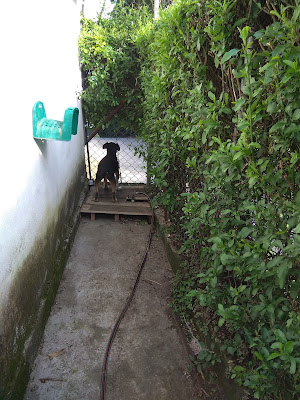 Both dogs like this spot to watch the world go by, but it is an area,because it is permanently damp is plagued by ants, so a raised platform gives them some protection, the old one had to be removed so that Francisco could break the concrete to find the tail of the pipe to the meter, it fell to bits. This one I made from the recently made Septic trap top, which I have now replaced with the concrete one again, now all is well. 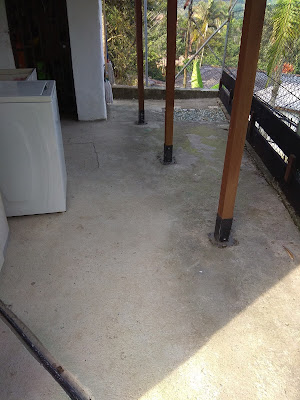 I have drilled through the bottom of each post base with a 1/2" bit, I had to do this in steps, the steel may not be that thick, but it certainly wasn't giving in easily. 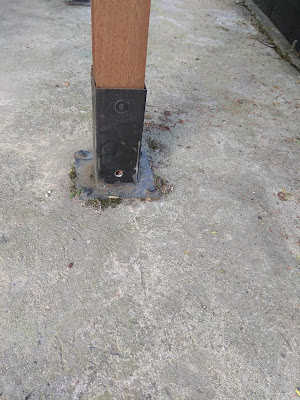 When Diego arrives, I will unbolt the bases from the existing floor, and insert a length of rebar through each base, which will be set into the new concrete floor and hopefully stop them from moving anywhere.

This morning I went up to see the Boss of the Water Compnay, to find out how much Sunday's work was going to set me back. I had to ask him to repeat the amount of the bill, as I nearly fell off my chair... for parts, including the mains water hope, some pipe, and fittings tha grand total of £25, for a full day's labour for Francisco £8.60, and an apology for the size of the bill, but it was a Sunday! It is times like this that you sympathise with the Labourers over here, I wouldn't have got out of bed for £8.60, I now feel even better that I gave Francisco more than that as a tip. I was asked if I was satisfied with the work and the bill, I think my smile said it all!

Finally having waited for the ground to settle where we had dug, I topped up the trench, and then relaid the gravel...yet again, I only hope it is the last time it has to be done. 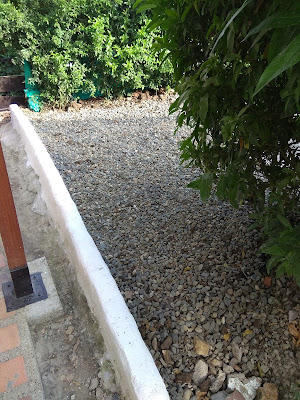