I Just Don't Believe It!

Last night we went to bed, everything was fine, no problems evident, and then bang! ... I got up this morning, and no water, intially I wasn't worried, because our Water Company is local, and owned by all the people on this area of the mountain, albeit we don't receive any bonus for that, and pay our bills like everyone else, but it does mean that when everyone else in the Valley on a National Company supply has no water, we do! I sent a message asking when the supply would be back up and running, and waited.

The front gate bell went, and one of the Engineers was there, it wasn't a Company problem it was us, he showed me our meter in the road, and it was spinning away merrily, we had a water burst, so he cut our water off. The problem was then finding out where we had a leak, either under the house or between the road and the house, a distance of 25m or so.

I just don't believe my luck, or lack of it. Anyway whilst Marcela was chatting to the Engineer, Francisco, I changed into my work clothes. He had told us, he would do the work, and the cost would be added to my bill, I wasn't arguing with that, it was Sunday after all, and I wouldn't have got anyone else, and we didn't have so much as a drop of water.

So where do we start, first is was open up under the house for the third time. 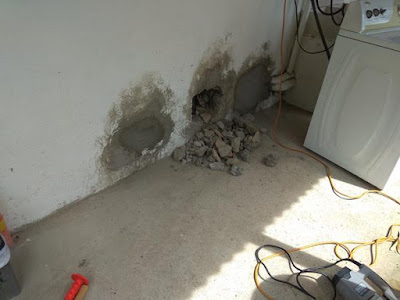 This hole had the pipes to the old kitchen, and was the obvious place to start as it was the natural beginning of the line, but the access and view under the house is limited. I said there was a 'T' joint there, but Francisco was adamant that it was an 'L', so wouldn't have gone out of the front of the house into the garden.

That left us little option 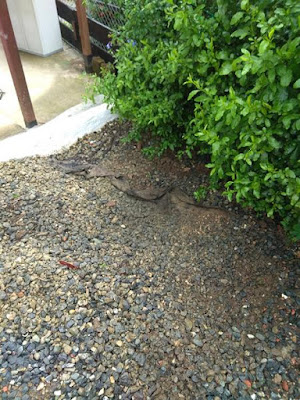 Just the thought of shifting all that gravel yet again... but it had to be done, to make things a little easier, I suggested that we move the gravel along the white wall in front of the house, that was where I had installed the land drain, so we shifted the gravel, and filter, then the land drain, this took us down about 15", then it was time to start digging. Francisco would do a stretch, then we changed places whilst he had a break,a short one... then he resumed, well he is at least half my age! 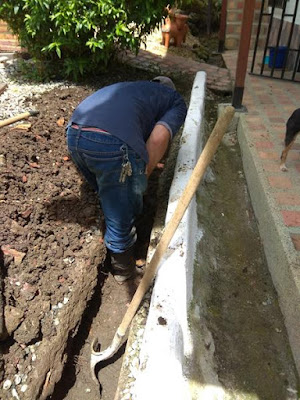 We kept going down, but found nothing, then Marcela had this brilliant idea that it could be under the path at the end of the ditch, so I cut it out, using a disc cutter. 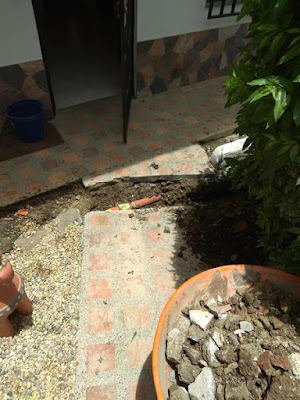 We found another pipe, but not the one we were looking for, unfortunately Francisco put the pry bar straight though it, so I had to do a running repair, which is why you see the yellow pipe stuck over the holes.

Marcela then came up with the idea of ringing the person we bought the finca off, he said the pipe ran from the road, under my now workshop, and straight down the garden to the old kitchen, but it was buried deep.

It was back to work for Francisco and myself, whilst Marcela kept us supplied with drinks. 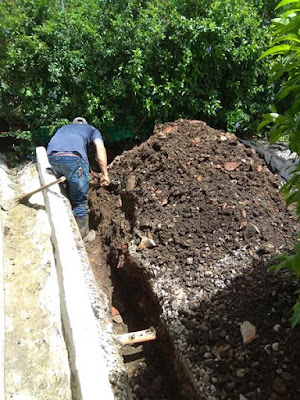 We took it down to 1.5m and nothing, by this time, we had both had enough, but unless we could find where the pipe entered the house, we were snookered, as we couldn't seal off the damaged area and attach new.

I again queried the union under the house, I was still convinced it could be a 'T' so Francisco lay down at the hole and started chopping the concrete again.

Sure enough it was a 'T' union, if we had found that earlier, we could have saved ourselves a lot of backbreaking work, but that's life!

Francisco said we would lay a hose, not a rigid pipe, as on the mountain this was now the norm, with all the land movement, this is laid above ground where possible, to avoid future problems.

Having cut the pipe and turned on the water to confirm none was reaching the house, which it wasn't, Francisco went off to get the hose and bits he needed.

In the mean time I started filling in the trench again, with soil and rubble. This time I am going to leave it a few days to settle, before topping it with gravel, because my previous work has sunk, taking the gravel with it. I still have sacks of rubble, so will be able to top up where needed. 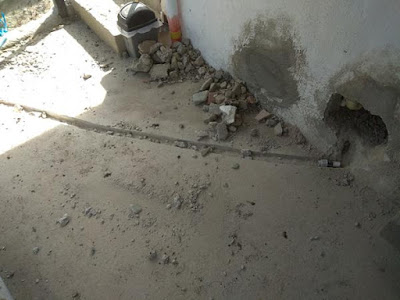 This wont be a problem because it is where I am having the new concrete floor, and tiles.

For me there was one problem I couldn't get my head round, how to get the hose passed my workshop, if it was squeezed between the wire fence, and the workshop wall, which was possible, it was vunerable, anyone could stick a knife into it.

No problem for Francisco, we took the hose up the flowerbed from the house to the workshop, then straight up the wall of the workshop, and wedged under the first row of tiles, 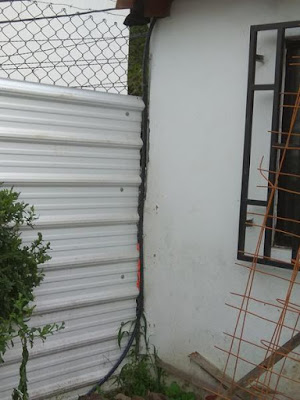 over the roof and down the other side, bingo, done and safe! 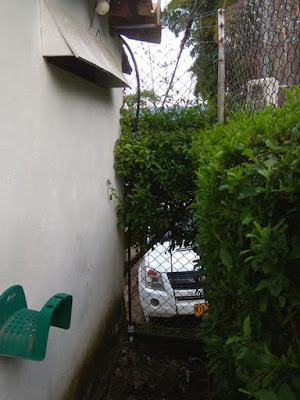 The hose was connected up at both ends 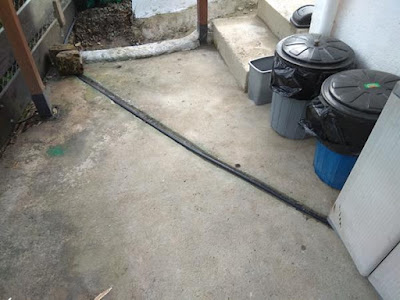 We now have water again. by the time Marcela and I had finished cleaning up it was after 5pm, and I was fit for nothing, I'm still not. Part of that is my fault, because this morning, with all that was going on, I forgot to take my medication, I saw it on the desk when I finally got upstairs for a shower...Oops!

One has to wonder what this Finca has in store for us next, as long as it doesn't involve shifting that gravel again, I don't care.

Before you ask, no, I didn't re-install the land drain, Francisco didn't think there was a need for it, so I have 6m of 3" pipe full of holes, I'll keep it, I can always cut it up into sections for repair jobs in the future.
By Phil Sale at September 17, 2017