Yesterday was pension day, and those of you who have been following me for a while, will know I have had loads of problems with transfering funds from the UK to Colombia each month.

The last few years I have used Azimo, and it was only their exchange rate that kept me with them, but I am glad I stuck it out, as a couple of months ago, they changed their Colombian Partner, and now from waiting up to a week or more, to receive my pension, they are using BBVA, I transfer my funds to Azimo on the evening before (due to the time difference), and now it is in my account by 10am the following morning, maybe I shouldn't tempt fate, but until now, I am beyond pleased with the service, long may it continue.

This morning, I have been working in one of the downstairs guest rooms, there has been a problem with damp, probably due to the leaking pipes, and also the side exterior wall, which is just brick, with no protection, I have now had permission from our neighbour to go into her garden, so I can spray the wall to stop water penetration, but I need a dry wall before I do it, which at the moment isn't going to be any time soon.

Firstly, I did some electrical work, being as it is a room Marcela and I don't use, it was a low priority, but it had to be done, I removed an electrical socket that had been fitted into the corner of the room, and I mean literally into the corner, so it only had the plug socket, none of the protection it should have had, it was my intention to moved it out of the corner, but on removal, I found that it had numerous wires connected to it, and would have been a royal pain to move. I therefore found a surface box in my stock, but did not have a new double plug socket, fortunately our neighbours at AgroZarzal did, so I bought one, which saved me a trip into town. I blocked off the existing box with a piece of ply, held in place with mastic, allowing the three cables needed to poke out of the side, being careful to tape off each wire, as I wasn't turning off the power.

I then mixed some cement render in a bucket, and rendered over the ply, and at the same time, filled another hole in the wall, which in a past life had housed a TV aerial cable. For some reason this house does not have plastered walls, they are all rendered.

Having removed all the flaky paint   and loose render, I brushed on stucco, I had half a tub left over from the outside job when I did the pool wall. This had hidden a multitude of sins, and once it is dry, I will repaint the whole room.

When tidying up, I was walking down to the workshop with my tools, when I did a double take, at first I thought it was a long leaf in the pool 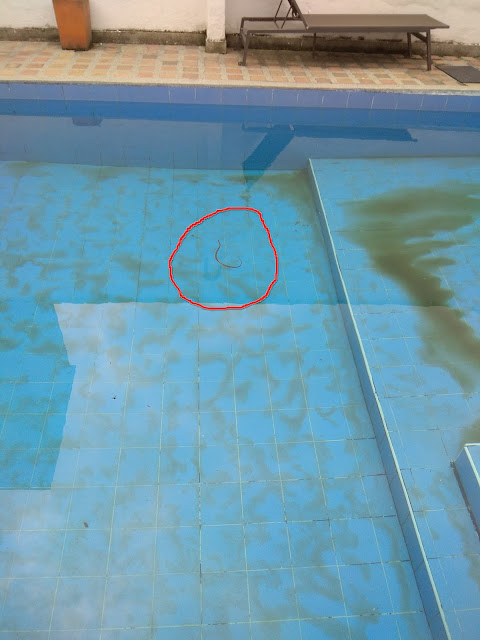 Forgive the state of the pool, whether the cover is on or not, when we have tropical storms (every night this week) the pollen and bits from the surrounding trees find their way into it!

Then the object moved, and confirmed it was a snake, not a big one, but a snake is a snake, and I don't like them. 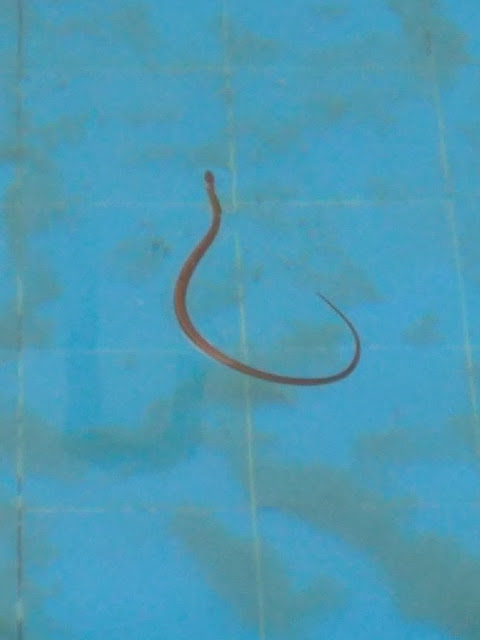 Not knowing much about Colombian snakes, I wasn't taking any risks, this is only the second we have had here, and fortunately I wasn't home when we had the last one in the house, a year or so ago, a neighbour came to Marcela's rescue on that occasion,

I didn't want the snake getting out of the pool, and connecting with either of the dogs, so out came the net, and as with the frogs that find their way here, it went flying across the neighbours property...job done!
Posted by Phil Sale at 14:21