Still Here for a While Longer

After an early rise at 5.30am, I was on the road, making my way to the other side of Medellin for my 3 monthly cancer check up, I didn't think I was going to make it, the traffic was horrendous, I think it was people trying to beat the start of Pico y Placa, where they are barred from entering the City between 7.00 - 8.30am, my appointment had been changed yesterday, from 8am to 7.30am, I made it with a few minutes to spare, only to find that my Specialist was running a few minutes late, so I needn't have worried.

I had my check up and all appears fine, he has now given me a six month appointment, I am hoping that if that is clear, I will be cut loose.

I then went on to buy my orange marmalade, to find there appears to be a shortage, it is imported from France, there were only five half size jars on the shelves, so I grabbed the lot, and a large jar of raspberry jam, something you never see over here, as our version is mora, which is lovely, but raspberry jam will make a nice treat.

I eventually arrived home about midday, having stopped off for lunch on the way, the menu of the day was 'Mondongo' which is tripe...no thanks, so I had to forego the cheap option, and have grilled chicken in mushroom sauce off the menu, with a side salad, it was delicious.

Back home, I changed, and started work on the fence again, managing to get it finished, as the heavens opened. 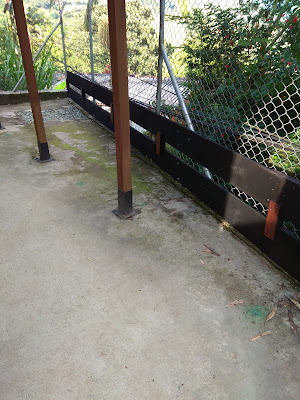 The spacers worked as intended, and two rails is sufficient, as it is only to block the view both of, and from the neighbours below, which it does. The spacers need another coat or two of engine oil, but otherwise that is complete.

My next job is to drill through the base of the posts you see in the photo, of which there are four. I need to drill less than 5cm from the floor, and insert rebar, so that the rebar is encased in the new concrete floor when it is poured, and stop the posts from sinking further with the old floor.
Posted by Phil Sale at 18:51