We should be in a sweltering hot summer, with not a drop of water to be seen, but instead of that, we have storms every night, and the last couple of days into the day as well, as a result the temperatures have plummeted, instead of in the 30's ºC, we are in the low to mid 20's, you can definitely feel the difference. I guess all the devastation further north in the Caribbean and America, as a result of the hurricanes is having an effect, but it is certainly not welcome.

Today we are planning a trip out for lunch, and taking the Mother-in-law with us, unless it brightens up, it's not going to be much fun, but at least it will be a change of scenery, that is if the cloud lifts, and lets us see anything.

I will post on our journey later on, but for now, I had better look out some warmer and waterproof clothing!

Update:
There was not enough for another Post, we went up to Llanogrande for lunch, there is a nice outside 'Eatery' there off the carpark of a small Mall, normally I have chicharon there, but due to my medication, that was off the menu, we all ended up having a chicken kebab with salad etc. and from there we went on to San Antonio de Periera, which was just down the road, there they have places that just sell Postres (Puddings), nothing else, Los Postres San Antonio. 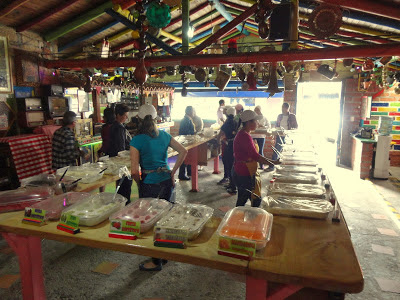 You pay up front, and are given a wooden chip, then you select the postre you want, if you scroll down my 'Restaurant Review' page you will find more details, suffice it to say, it is a regular pit-stop, when we are in the area.

That done, we made our way home, dropping off the Mother-in-law on the way. We were lucky, it didn't rain, and for the most part was reasonably warm, which considering how much higher we were up there was a bonus.
By Phil Sale at September 10, 2017