I was up early as usual, and after walking and feeding the dogs, I started work, I drilled 7/8" holes in the wood siding, where the tiles would butt up, sealed the wood inside the hole with silicon, then inserted 3/4" pipe into each hole again with silicon, to act as drain pipes.

Oscar and his Helper arrived about 8.45am, after a chat on how we wanted the tiling laid out, I went and cut them a bucket full of 15mm wooden spacers, then we left them to it. They worked all morning, 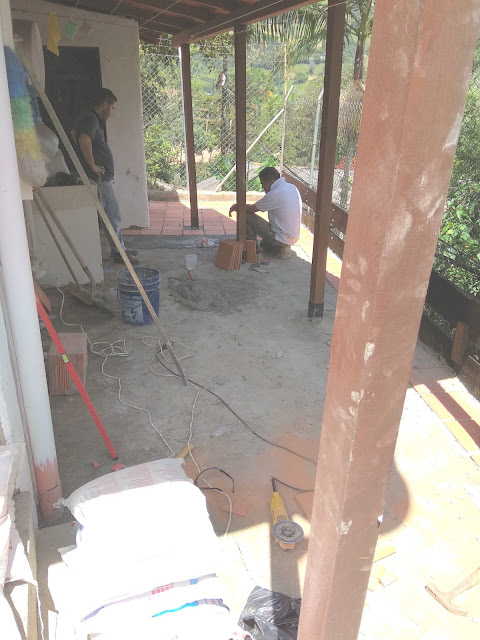 at which time I was reasonably pleased with what had been done. Marcela being Marcela, insisted on preparing lunch for them (no discount on the bill!), then mid afternoon, I was called down, as there was a problem.

I walked around the corner, and thought a bunch of schoolkids had been let loose with the tiles, they were all over the place. Oscar told me that the problem was that every tile was a different size, and they were. They were supposed to be 25cm x 25cm, but instead, they were 25cm in one direction, but the other ranged from 24.6 to 25.5cm which when using the spacers, threw out every line.

It was a case of déjà vu, it was like my time in Spain, buying tiles was just the same, although I think in this case, it was because they were cheap tiles, I just wish the warehouse had warned me.

As a result I ordered Oscar to strip about three meters of his work, I wasn't accepting it like that, now he is working without the spacers, which he is not happy about, the finish is not going to be brilliant, I am just happy it is in the drying area, where most people dont spend much time...only me!!! It might look better once it is grouted.

As a result Oscar fell behind, and is returning in the morning to finish the job. So no photo until it is finished, at which time I will have to show what we are left with.
By Phil Sale at October 15, 2017