Ever Get That Shaking Feeling?

Yesterday turned out to be an interesting day, after the snake incident, Marcela was not that keen on coming home, after her previous close encounter, but she did eventually, in the middle of a Tropical Storm!

We then decided to watch a movie, by this time it was getting on for 8pm, we watch these on my computer in the office, the dogs tend to leave us alone.

Suddenly everything started moving, the computer, the chairs, it went on for a few seconds before settling down again, there had been an earthquake, Marcela was petrified, I have been through a worse one here, where I was moved across the room on my desk chair, but not for some time.

We looked it up on the internet and found this: 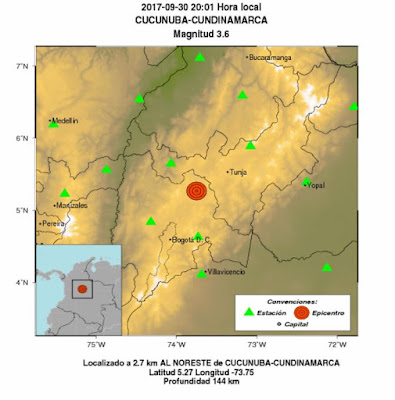 but the time looked a bit out of sync, as I thought it had been later, and for a 3.6 at that distance, I wasn't convinced, then shortly after we found another report, a 5.7 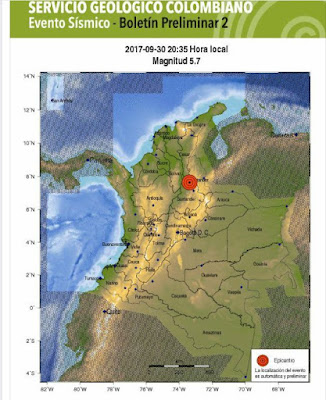 This was the one we had felt, just a tad north of us. As we all know things come in threes, so we sat waiting for the next one, by this time Marcela was fully dressed, she wanted to be ready if we had to run, but nothing happened, we watched the rest of the movie 'The Book of Henry', and went to bed, Marcela fully clothed.

This morning I got up at 7.10am to find the third had struck 20 minutes earlier just north east of us, but again only a 3.7, I certainly hadn't felt that one.

Hopefully that's our quota for a while, but you never know!

Diego is hopefully coming next Saturday to lay the new concrete floor in the drying area, and the following Saturday to tile, so this morning I started preparing the site, I removed all the nuts from the rawlbolts holding the post bases, the bolts I will knock into the floor nearer the time. having cleaned up the bases, I gave them all a coat of paint, to help slow down the rusting process, especially once they are embedded in the new concrete.

I then cut some formwork to hold the border of the new concrete at the back of the house. I now just have to power wash the existing concrete during the week, to clean off the algae, and then I will be ready to be the 'Gofer' for Diego.

Sad day today, we heard from our friend Juan David Guerrero that he has closed his Restaurant 'Los Canastos', it was one of our favourites, we wish him well with his new venture whatever that might be, and will now be looking for a replacement.

Talking of which, we are going to try out a new Restaurant that has opened just up the road from us, 'La Cumbre', we can walk, as it is only about 300m away, lunch at 1.30pm. It looks more expensive than we normally venture to on a regular basis, but I'll report back later, and put a review on the Restaurant Review page.

Update:  If you click on the Restauarant Review Page, you will see how our visit went to La Cumbre, I won't repeat myself here.
By Phil Sale at October 01, 2017