I was hoping to be able to say that all would be finished in the Drying area by tomorrow, but circumstances beyond my control  have put paid to that.

Oscar had finished all but a few cuts in the tiling on Thursday, I was really pleased with it, even though progress was slow. 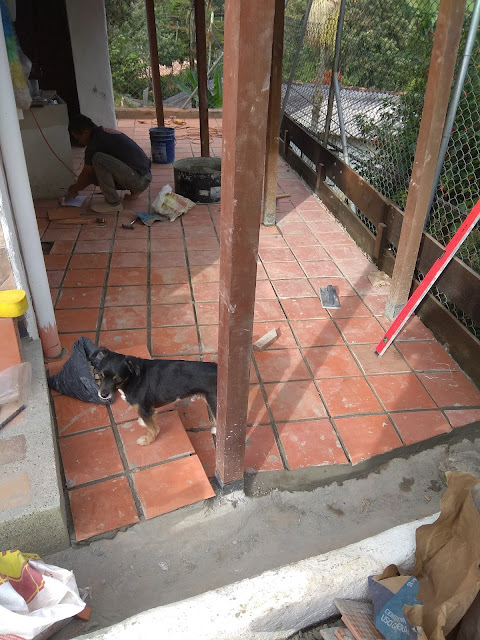 Oscar decided to start grouting at the back of the house, mid afternoon, and did about three meters, before he packed up.

He was here again first thing yesterday, and finished tiling in the tool shed, then he started grouting from where he had left off, I had never seen it done as Oscar was doing it, he mixed the grout to a dough like consistency, and troweled it between the tiles, he said it was because there was a 15mm gap between the tiles, but it still seemed a strange way of doing it, I'm sure the professionals amongst you will tell me if that is right.

Mid-day came and went, I started getting worried as the storm clouds were gathering, I had all my plastic sheeting ready, but it was not going to be enough.

I had already made the decision that Oscar would finish the grouting, and then I would do the cleaning and sealing, I would then only have myself to blame if it wasn't done right, I know from experience that my standards of finish are far different to workers here. 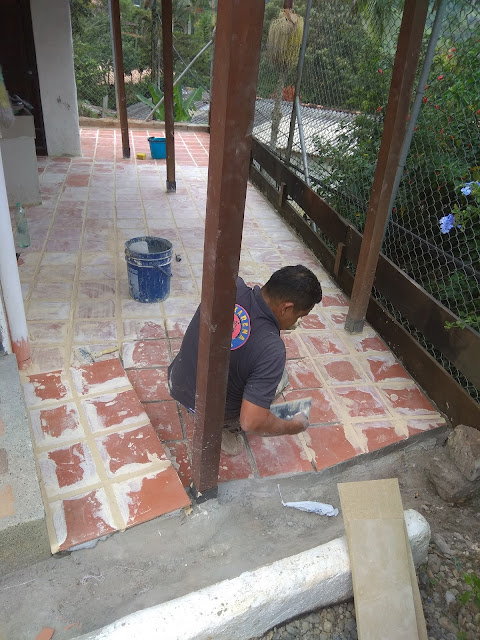 I think Oscar was whacked by the time he had finished grouting and done the first clean. 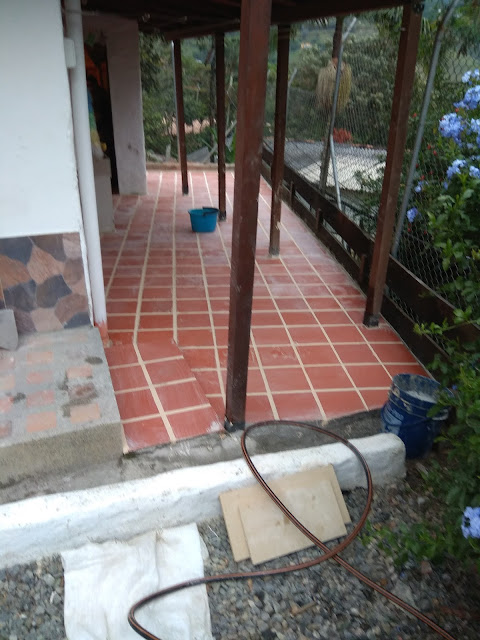 Oscar finished, helped me move the washing maching back into place, and left just after 5.30pm, by which time thunder was already in the area, so I tried to cover as much as I could with the plastic sheeting, thankfully most had some protection from the roof, we none of us were prepared for what was to come.


But this was just the precursor of what was to come, rain was being driven so hard it wasn't coming down vertical, it was travelling horizontally, and straight under the roof of the drying area, all I could do, was keep my fingers crossed and hope.

I got up this morning, and was pleasantly surprised, the plastic sheeting had done it's job, and the area under it was not damaged, but about two meters of grout was affected under the roof, and I will have to re-grout it, fortunately there was a bag over.

I went out this morning to replenish the larder, and to get some other material for jobs I will have to do this week, two days ago, I discovered termites chomping our bedroom ceiling, they need stopping before they get a hold. 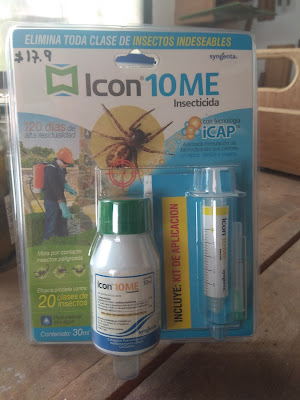 Not for much longer! when I have a few minutes to gather up the protection I need whilst doing the job, I will turn into The Termite Assassin!

In the past, I had to register to buy this chemical, but they must have relaxed the regulation, because, although it was kept in a stockroom and not on the shelf, I was not asked for ID this time.

I also bought some 3" pipe fittings, I think our rainwater downpipe from the roof is blocked, rather than pay someone to go on the roof and access it from the gutter,, I want to cut into it, from the balcony, and insert a rodding point, so I can fix the problem, now and in the future.

Surprisingly, it wasn't my knees that started giving me gip, it was my back, so I would clean a patch, then do something else for ten minutes, then return and do some more. That was fine until mid afternoon, when the thunder returned, and shortly after, the rain along with it, which forced my Supervisors to move! 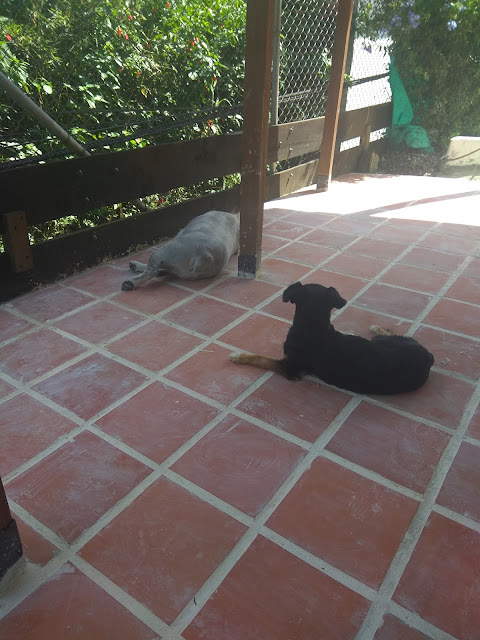 I think now the area is tiled, we will all be making more use of this area, maybe more so than the Kiosko / Gazebo, because not only is it shaded, but there is almost always a nice breeze here, which is why it is ideal for clothes drying.

I managed to get most of the tiles cleaned, stopping just short of where I am going to have to re-grout. 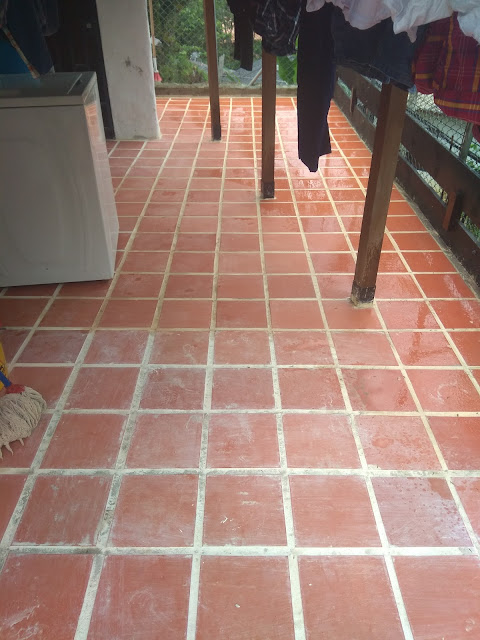 I went and had a look before it went dark, and it looks as if Oscar has done a good job, the rain water is running off the tiles, and not coming under the roofed area. I just have to hope that the rain does no more damage to the grout before I can seal it, which I can't do, until I have done the repairs, and it is dry!

Weather allowing, I want to do the grouting in the morning, to give it time to go off, before the afternoons storm, we are also hoping to go out for lunch, so that is another incentive to get it done quickly.
By Phil Sale at October 21, 2017