No Peace For The Wicked

This morning is overcast but dry, for the moment, so I started with some gardening. With all the rain we have been having, everything is growing at an alarming rate, it was time to trim the hedge alongside the garden, and other side of it in the neighbours lane below.

I now keep a close eye on the state of the hedge in the lane, after a complaint from one of the daughters, we don't have the best of relationships with them, unfortunately they are one of many Colombian Families here, who truly believe that all Foreigners are rich, and they begrudge that, I wish I was, I could then pay others to do all my work, and just sit back...bored stiff! 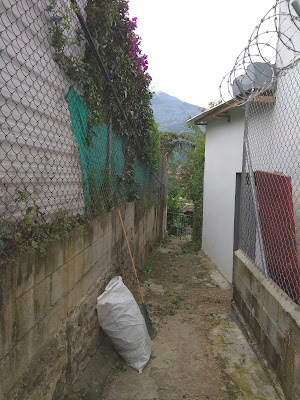 It certainly looks a lot neater now, and should last a couple of weeks hopefully.

That done it was time to don my apron (not literally!), we had run out of frozen meals for Marcela to take to work for her lunch. I know when I was working, it was sandwiches, but times have changed, the younger generation wants more! 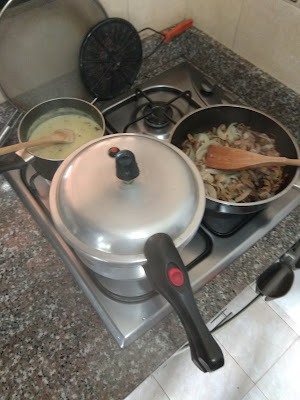 I had taken the last of the pork out of the freezer first thing this morning, so it had partially defrosted, this went into the pressure cooker with a couple of stock cubes, I then cut up some onion and that with mushrooms went into the frying pan, and finally a pan of mushroom soup, made thicker to use as a sauce. 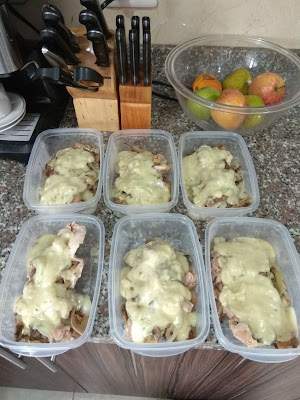 Half an hour later, we have six more lunches prepared for the freezer, then I only have to prepare the rice, fresh each day. However I know now, that Marcela will only use one maybe two of these this week, as she will pull a face at having the same meal two days running, there is just no pleasing some people.

Tomorrow, I shall have to go shopping, as I have used the last of our meat supply, unless we want to live on chicken!
Posted by Phil Sale at 11:18