I am struggling to get a lot done, with one arm, everything is taking so much longer to do, I haven't got any pain, just permanent pins and needles, and no strength, it is frustrating more than anything else.

I don't think I am ever going to be rich, just as one thing is sorted, something else comes along, but recently they have been pouring in!!

It looks as if our washing machine is on it's last legs, I bought a Whirlpool, thinking a good make would last...well it did last nearly six years, but when I think that my Mothers machine and wringer, which was handed down to me, was probably twenty fours years old when I finally got rid of it, this one hasn't reached pubity! It showed signed of problems a month or two ago, it was not spinning correctly, and the machine had times when it had to be put on one or twice more, before the clothing was dry enough to take out. More recently, it started dancing around the floor, and sounded as if the barrel was trying to escape out of it's case, I thought it needed leveling, but that isn't the problem, and looking inside, the outer surround of the barrel has broken and a crack running down the back.

Now begins the hunt for a new one, I have found a website selling white goods in Bogota, with free delivery, but Marcela, not being used to online purchases, is suspicious of anything bought online outside Medellin, I can buy a machine that takes 18kg for 900,000, whereas, the cheapest we have found in the local shops, is one that takes 13kg for 1,150,000 COP before delivery, to me it is a no brainer, but I have to persuade her indoors, and then pray nothing goes wrong.

On top of that, on Saturday, I noticed that the tiles were starting to move on the workshop roof, John the chap who built it, didn't do a very good job of placing the tiles in the first place, and didn't render on the ridge tiles, now I am paying the price. 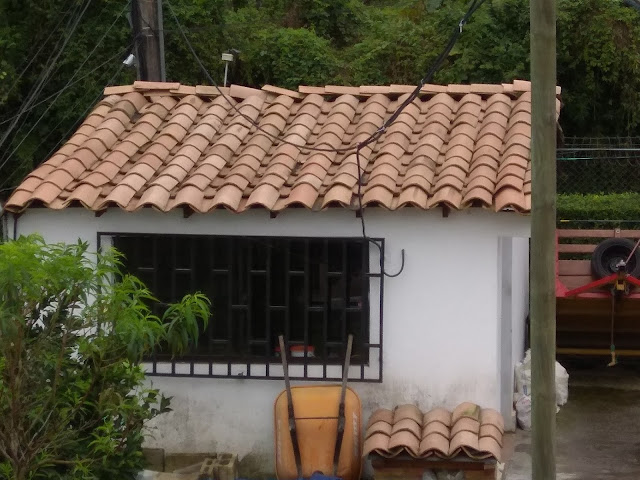 I don't know if the recent storm caused the movement, or cats have been up there and disturbed them, but they need stripping and re-doing, so we have been in touch with Diego, and hopefully we will hear from him in the next day or two, fortunately the bitumen felt appears to be intact, as there are no leaks into the workshop, at the moment.

Talking of workshop, this morning I fitted the weatherstrip. 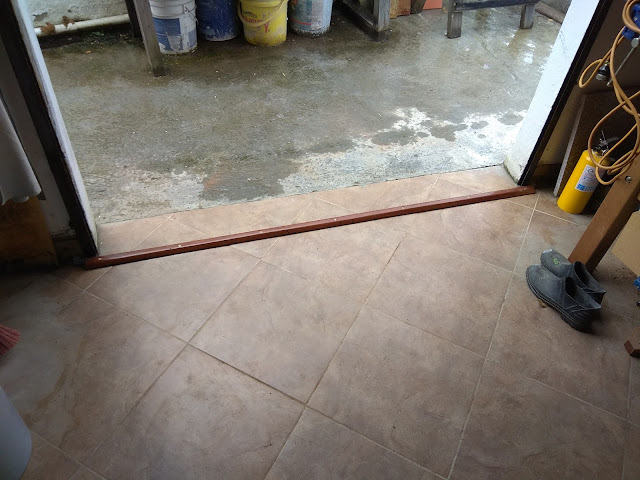 It had to go inside the door, otherwise the rain would still have gained entry, I siliconed the underside, then drilled and screwed the strip in place, but I then realised there was still a problem, because the door channels either side, for the roller door, have a slot cut in the bottom of them on either side to let the bolt slide into and through the channels,  which would have given access for the rain water. 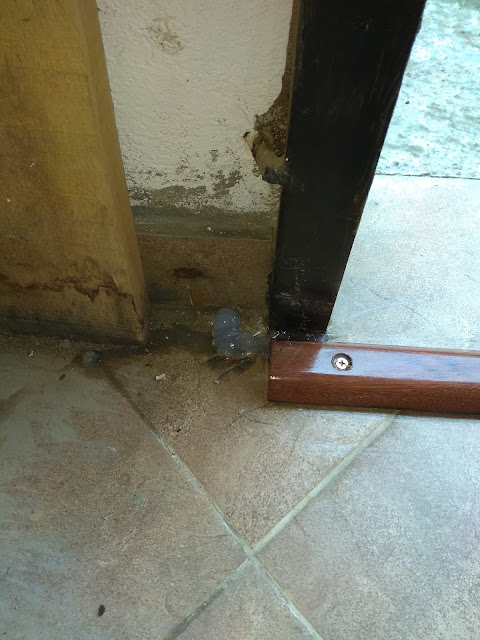 For the time being, I have put a dam of silicon in an 'L' shape, from the wall, out and to the weatherstrip, leaving enough room for the bolts, if that works, fine, if not, I will have to make a wooden 'L' and stick that in place.

Hopefully now, my workshop will remain dry, as you can see from the plank standing in the top left of the photo, some of my stock was getting damaged by water flowing into the workshop, that should now be a thing of the past.
Posted by Phil Sale at 13:43