We had a call from Diego last night, to say he will be here on Saturday morning by 8.30 at the latest, to lay the new floor, so it was time to make sure everything was ready to go.

I have the metalwork to go in the concrete, I went to AgroZarzal and bought four sack of cement and sixteen of building sand, I will need more, but it will be enough to get them going, at least then I wont overbuy, and can buy it as needed.

That done, I decided that I needed to mix cement to fix the last hole in the house wall in the Drying area / Zona de Ropa,  but to make it worthwhile, I decided to make a start on fixing the footpath from the parking area to the house. Between bad construction by the previous owner, and land movement it is cracking in a number of places 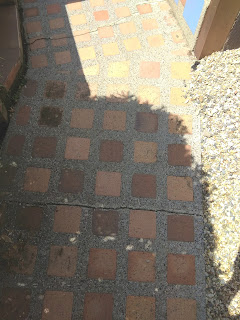 These are just three of the offending cracks, there are five in total, but I dare say more will show in time, unfortunately the previous owner who was also a Builder, was not that particular about the quality of his work, which surprises me a little. There is no foundation to the path, it was laid on earth.

In time I will have to replace it altogether, but for now, I believe I can do a presentable repair job, myself.

I first action was to cut one of the cracks open, so I had a channel about two and an half inches wide to compact rubble in, then fill with concrete. I used a disc cutter to cut down, then broke it out with the SDS drill. 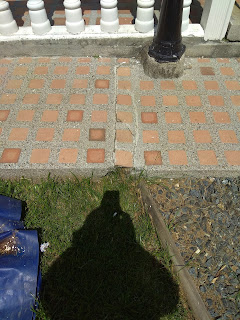 That done, I mixed up some concrete, well, that's what they call it here, I call it cement, they don't add gravel unless it is going to take a lot of weight, there are two grades of sand, one they call fina, which is used for rendering, and the other is called pega, and used as concrete, or for building brickwork.

Because I did not need a great amount of cement, I didn't use the concrete mixer, I have a half barrel, which is used to mix by hand. This would give me more than enough for the work I had lined up today. 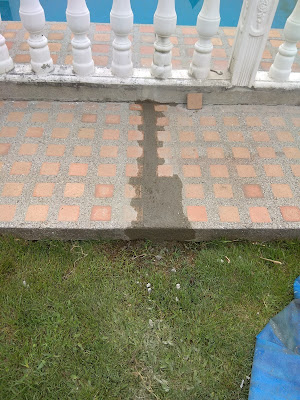 Unfortunately the crack on this one, had not gone straight across, so nearest the lawn, I had to cut it wider, but in the main, it went between two lines of tiles, so doesn't look too bad, and will be hardly noticeable to the uninitiated once it has dried out.

I had a board held in place with concrete blocks along the lawn to give it a crisp edge, again like the conctreting I did down near the house, I will give it an acid wash once it is totally dry.


That done, it was down to the Drying area and blocking up the last of the holes in the house wall, hopefully this will be the last time I have to crack this open. 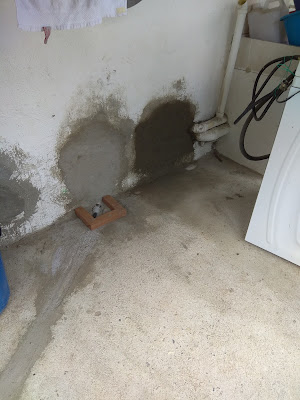 I'm leaving the painting, until Diego has finished the floor and tiling, there is no point in making work for myself, and I am sure he will be splashing concrete in every direction. Filling this last hole, forced me to disconnect the washing machine, I had done two loads this morning, but it will have to be moved out of the area, I will then move it back, Sunday or Monday, until the following week-end, when hopefully Diego is returning to tile the floor.

As you can see in the photo, I have made a hardwood frame to go around the main water pipe connection, this will support any tiles above, and allow for access to the connection in the future if needed, there will be no wieght on top of it, and it will be covered by a plastic cupboard, so will be quite safe.
By Phil Sale at October 13, 2017