No Oscar this morning and no contact received from him or Diego, it looked as if he had walked off the job, as he still has more than 50% to do, and only $50,000COP left to be paid,  I was fuming, I had waited in until 9.45am then gave up and went to do some shopping.

Whilst out, Marcela rang me to say she had got hold of Diego, and reminded him that our contract is with him, as a result he said he would come at the week-end and finish the job.

Back home, I was wondering how I could temporarily move the washing machine back into position, as the completed tiling covers half the area needed, I placed some short planks in the area, and was going to wait for Marcela to return and help me move it, but it is extremely heavy so wasn't sure if we could do it.

I then got out a scraper and cleaned the excess adhesive left on the tiles by Oscar, now they just need an acid wash, before sealing them.

It was then time for some concreting there had been a step from the pavement to the parking area, since we moved in, and had the parking area raised, it has always been a nuisance, for wheelbarrows or trolleys, it was time to do something about it, but with traditional concrete, including gravel! 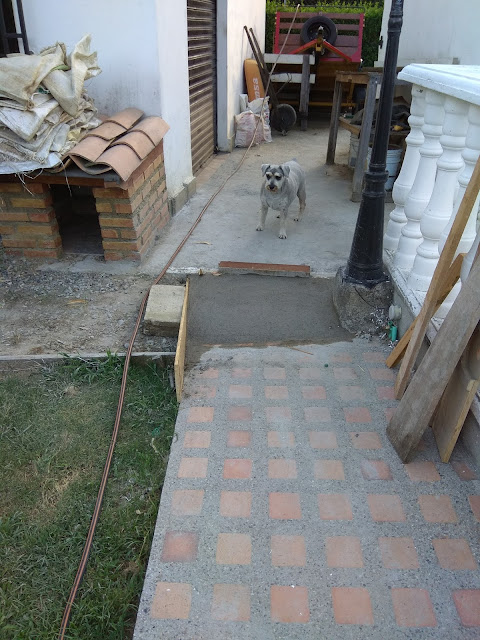 It is sloped towards the lawn to stop water pooling, hopefully this will make life easier, I removed the boards for the photo, but they have gone back on, so we don't have it covered in paw marks. 😃

I then had an idea with regard to the washing machine, but before I celebrated I had to do some hunting in the workshop for parts. 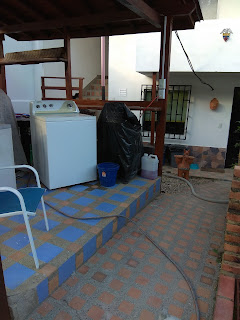 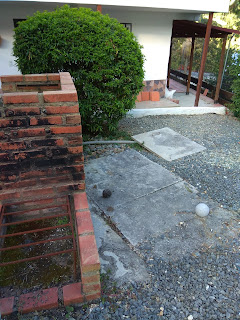 Marcela returned from work, and then heard from Diego, who had finally spoken with Oscar, he is claiming he had an inflamed knee, and will be here tomorrow morning, why he contacted no one, I have no idea, but I will find out tomorrow, I honestly wouldn't want to be in his shoes, as Marcela will also be here, and does not hold back, so he may end up walking out anyway!
By Phil Sale at October 17, 2017