Last night we received our latest Water Bill, along with it was a letter announcing the annual 'Shareholders' Meeting on Saturday at 8am, the letter goes on to say that the meeting is Obligatory, and there will be sanctions for those who do not attend!

I have to say, the tone of the letter left a lot to be desired, we are 'Shareholders' only in as much as the Water Company is the property of all the residents in the area, you don't actually own anything, as soon as you move your relationship ends.

This causes a problem for us, Marcela has to work, and when anyone speaks at the normal speed here, which is fast, I am left behind and don't understand what they are on about. As a result I went up to the Office this morning, unfortunately the Manager was not there, so I explained to his Secretary, she thought it was hilarious, I asked what the sanction was for not attending, she said it was financial, I don't understand that, as far as I am aware we have never had a fine in the past, and we have certainly never attended before. I told her that the only option was for me to go up there for 9am, and walk out after 10 minutes, there would be no point in me staying if I don't understand what is being said, and on past history of any meeting here, it will probably last between two and three hours! She said she would get José to contact me when he came into the Office, it's now 2.30pm and I haven't heard from him so far!

It has been a rotten morning, raining for most of the time, there was a short break in the weather, so at least the dogs got their walk. Lunchtime came, and the sun came out, so it was time for some work. Marcela left to take over from her Mum in the shop, and I decided to help her out.

The swimming pool has always been Marcela's responsibility, the last couple of weeks, it has been filthy, because of work going on nearby, so Marcela has spent the last couple of days, getting the chemical levels correct, also getting all the dust and dirt to settle on the bottom, so once she had gone, I set up the vacuum, and gave the bottom it's first clean. 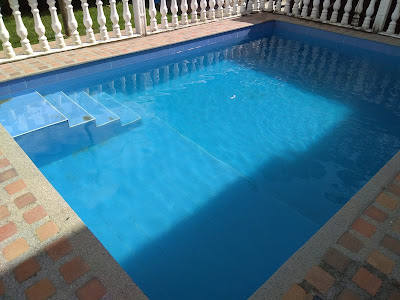 It looks 95% clean now, we`ll just let the last of the sediment settle, then give it another vacuum, this is the problem when you inherit a water tank, as opposed to a pool with built in filters and pump!
It could do with the water topping up, but as the clouds are already gathering again, and the wet season isn't over yet, I'll leave it, to get filled naturally, it will probably be dirty rain anyway, so the cleaning will continue.
By Phil Sale at November 16, 2017