Sunday night wasn't much better, the music varied in volume throughout the night, but Monday being a Bank Holiday, didn't bring a lot of change, Marcela spoke with a Patrol on duty at the Station, over the phone, he said a patrol had been the previous evening, but stated the volume was not that high, I checked the video tape, and they had attended at 5.56pm, some sixteen hours after my first phone call.

Marcela had had enough,  having heard a rumour that the Mayordomo had paid off the Patrol from a previous incident about four weeks ago,  without letting me know, she went up to confront the Mayordomo, whilst there, she had an audience of the people renting the Finca, some of whom apologised, then Marcela saw a Police Patrol and caught their attention, they understood the problem, but said their hands were tied, the responsibility being with the Mayordomo to control the Renters, another neighbour passed whilst they were talking and also said he had had no sleep. Nothing was mentioned about the rumour, as we had nothing to back it up.

Yesterday, Marcela spoke with the Administrator of the finca de recreo, on the phone, he stated that he had spoken both with the Mayordomo and the Police, but didn't think there was a problem,  however he accepted it was one for us, and said he had spoken with the family, of which he is part, and although the finca is rented out each week-end between now and Christmas, the family are then going to move in, and in the New Year, they will move in permanently. Marcela informed him that we will monitor the situation, and will take action if the music volume is not controlled. It was left at that.

We have new neighbours, the 'local' outside our gate was used as a Stationers when we first came, but the woman sold the property to her brother, after being empty for ages, it was then a 'restaurant' of sorts run by his daughter, but she never kept to her opening times, and failed, now it is a Barbers shop 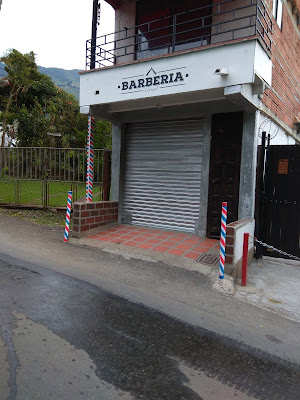 It is a really strange place to try this business, because we are half way up a mountain in the middle of nowhere, and it has to support three lads.

On Saturday when it opened, it was humming, but I don't think they have had a customer since, probably because they had cut everyones hair in the area. I chatted with them today, and they are really down, I honestly hope this works for them, because we could have had much worse businesses here.

We are on School holidays which doesn't help, had the kids been at school they would all be passing daily. I made the suggestion, that they put a sign outside, offering half price haircuts to kids under 10, between the hours of 10 and 4, when adults are working, keep that up until the end of the school holidays, and they should then have a good client base, they seemed to think that was an excellent idea, but would extend it to all students, we will see if they follow up on it.

My Montero went in for work on it yesterday, I am not sure what work Javier did on it, but it hasn't resolved the problem, and he didn't work on the differential, which is what he thought the problem was, so I rang him again today, and booked it in for Friday, to drain the Diff oil, remove the cover and put new liquid gasket on it, after it has been cleaned, hopefully that will do the job, if not, I will have to look elsewhere for help.