It's been an interesting day to say the least!

My hopes of a simple job on the Montero went out of the window, I left home at 7.30am for an 8am appointment to find Javier already at work, I think he had been panicking because he hadn't finished a job from yesterday, and was still working on it. He said he would start on mine as soon as he had finished. I went off for a walk, paid a bill, had a coffee, and returned at 9.30am, but he was still nowhere near finishing the previous job, I wasn't happy, what is the point in an appointment? He had my number, he could have rung me.

There was no point in getting worked up over it, I still needed the work doing on the Differential, so I walked to Niquía and the Commercial Centre 'Puerta del Norte', on the way I messaged Marcela, as I had planned on being home for lunch, before she left for work, she said she would meet me for lunch, crafty!!!

Whilst I was sat in the Commercial Centre, Javier rang me, but as always when they get excited, Colombians talk too fast, and on the phone, I had no hope, so I told him I would get Marcela to ring him, which she did, and it wasn't good news, the ring gear and one of the pinion gears were worn so much, teeth were missing, and causing movement, they needed replacing, and he needed my consent to order the parts, which should arrive during the afternoon (it sounds as if I know what I am talking about, I don't, I had to look up the parts, I am hopeless with anything mechanical, give me wood any day). Consent given, and having no idea of the cost, I met up with Marcela for lunch.

After lunch, we were only a hop skip and a jump from where we had had professional photos taken a couple of weeks a go, I hasten to add, it was not my idea, but it kept the peace, the photos were due to be ready for collection on Sunday, but we called in anyway, and they were ready.

Marcela was happy, and to be honest they are nice photos, out of about two dozen taken, we had had to select a package of three. 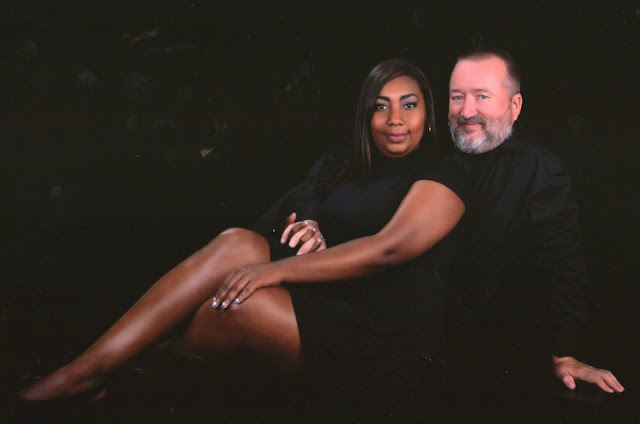 It's amazing what wearing black, on a black background hides, I didn't have to breathe in once! hahaha, although after these on the ground, Marcela had to help me up again afterwards. Now I just have to make the frames.

From the photographers, it was back to Javier, he was in the process of draining my petrol tank, which was nearly full, so how much of it I will get back is debatable. He was going to have to pay for the parts when they arrived, so needed cash, he thought about 500,000 COP, but wasn't sure, we asked him to ring and get a quote, because I was coming back home, which isn't just down the road. It turned out that he was way out, the price is 860,000COP that's without the oil, and the labour bill of 250,000 COP, here that is considered damned expensive, but when you convert it, to £303 / US$400 it seems like a bargain, I hate to think what it would have cost me back in the UK.

Javier showed us the worn parts, and we agreed that we would return in the morning to collect the car rather than him try to rush it, Marcela is staying at her Mum's after work. I handed over the cash for the parts, and then we went on to the Shop, where I left Marcela, and came home to a raptuous welcome from the boys.

As I keep saying, I could sell the Montero, but there is no guarantee the next car would be any better, younger yes, but it could cost me a fortune, this one is costing me about 2,000,000 COP a year in maintenance. Since I bought it, I have had the timing belt replaced, clutch, carburetor , water pump, battery, new set of tyres, and now this. Some time in the future it will also require a new starter motor, but hopefully that will come in next years bills. As long as it doesn't escalate from that budget I'll keep going with it, I have to admit to a certain fondness for this car!
By Phil Sale at November 17, 2017