It seems we have a long way to go before the Colombian culture is going to change wholesale. I stated in a recent post that Marcela had talked with the Administrator of the Finca alongside us, and he had said that in the New Year the Family intended to move in, so there would be no more problems! From my comment at the time you will realise that we were sceptical, but now we have had that doubt confirmed.

Last night Marcela was talking to a neighbour, who for some reason had phoned the Administrator, purporting to want to rent, that person was told it was in use for the whole of December, but if they recontacted in the New Year, it would be available to rent!!!!!!!!!!!!  He obviously had a short memory.

It just goes to prove that his only intention was to try and keep us quiet, sorry Mate, that plan has backfired spectactularly, we will now cause them as much grief as possible, we already have plans in hand, so watch out Villa Connie!

By coincidence, we just may have been helped by the Concejo de Copacabana, a group of people elected to ensure that the Mayor does his duty, they haven't had a very good reputation at doing this, but this morning they held a meeting with the Mayor and the Policia Nacional, on this very subject, however there is no news on the outcome, we live in hope, but not much more.

This morning I went into town (Copacabana) to run some errands, to find eight of more people painting the road, in the centre of town. 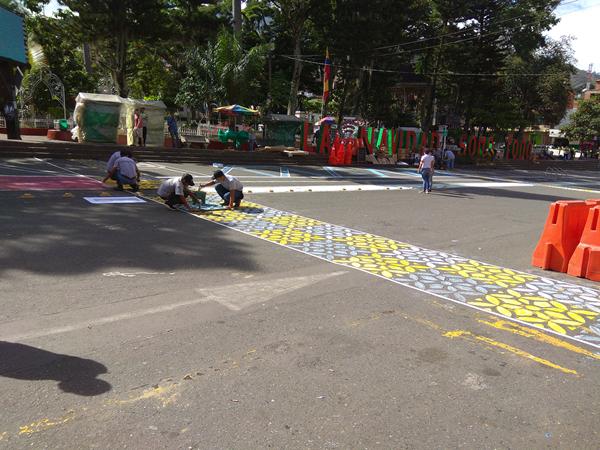 I am assuming that in some way it is related to Christmas, quite how I haven't worked out, but when money is desperately needed for other works, this seems like a total waste, maybe the Alcaldía de Copacabana (Town Hall) would like to comment.

Talking about Christmas, especially as all the decorations seem to be going up, except ours!!! I was in Exito (Hypermarket)  in Niquia the other day, and couldn't believe my eyes. 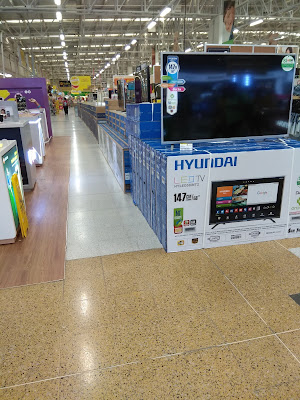 Yep...those are all TVs the whole length of the store, between 43 and 55", I couldn't believe it, especially when people have no money, but "Credit" is the culture of Colombia, and many don't care if they can't pay, because many don't have anything worth repossessing if they are chased.

Back to the present, when I returned home from Copacabana, I finished putting up Marcela's photos 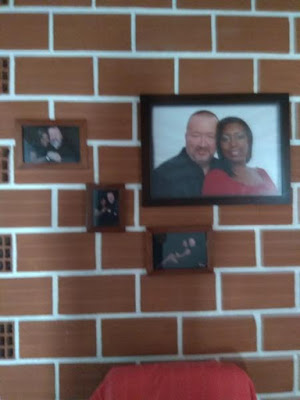 Sorry about the quality of the photo, I either had to put up with the sun, of take it in the dark and enhance it, I chose the latter, I'm just glad we don't have that many Visitors, who come upstairs to the lounge anyway, I rather not have a wall full of my own photos, but it keeps the peace.
Posted by Phil Sale at 19:41