For those of you who followed my woodwork projects, you will know that one of the big ones, was to rebuild my Gazebo, in doing so, I kept three and a half of the upright supporting posts, three and a half?... yes, if you go to the Header, 'My Projects' and then 'Household Improvements', you will find it.

Anyway, one of the uprights has suffered from the elements, the builders who upgraded the property for us, put in a concrete gulley around the gazebo, to take away drain water, unfortunately, through no fault of theirs, but due to ground movement the concrete had cracked, and water seeped down around the upright, causing it to rot.

I found this a few weeks ago, but due to the extremely wet weather, there was little point in starting work on it.

Today was the day! I started off by inserting two acrow-props to support the weight of the roof. 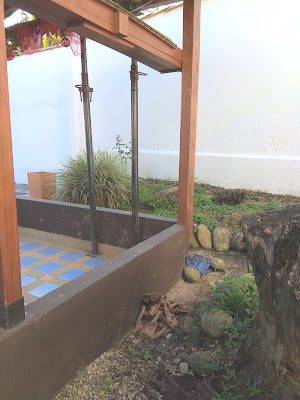 I started work on the old post, deciding to cut a dog leg joint, so that I could glue and screw the two pieces together, as well as embed it in concrete.

I marked out the cuts on the post, and did the initial cuts a chisel and mallet, then turned to my reciprocating saw, I ruined a blade in doing so, by ramming the concrete wall alongside as it vibrated, but it saved my hours of work with a chisel, so it was worth it. 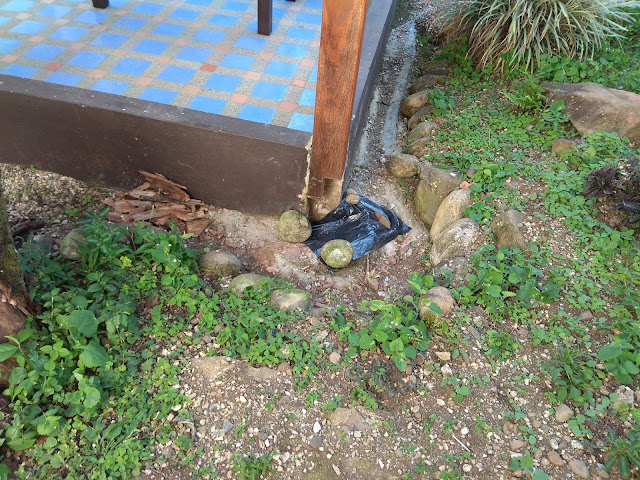 I also had to use my impact drill to clear some of the concrete, and  enlarge the hole to remove the rotten post, also to give enough space to fill with new concrete at the weekend, I will mound the concrete up around the post, to keep it clear of water, until the ground moves again anyway!

I did most of the work from inside the gazebo, leaning over the wall, so I had to bring work to a halt, as my back was starting to play me up.

The work now, involves, cutting the new fillet to size, deciding whether to immerse it in old engine oil, or coating it in a chemical paint, I bought years ago to paint on the side of the house, and then cover up with earth, but what works for brick isn't guaranteed to work as a wood preservative. I will also cut two hardwood plates to cover the two exposed joints, this should also make it look neater, the dog leg joint will not be visible.

After that it will be in the hands of the gods, and I will pray the repair works, and the whole lot doesn't come tumbling down, after I remove the acrow-props.
By Phil Sale at December 14, 2017