The other day, I bought the paint to redo the Quiosko / Gazebo walls (For those of you who have followed along over the years, I have been wrongly spelling Quiosko as Kiosko for six years, I apologise to all who read Spanish), so this morning, I decided I wasn't going to look at the deteriorating paintwork any longer. 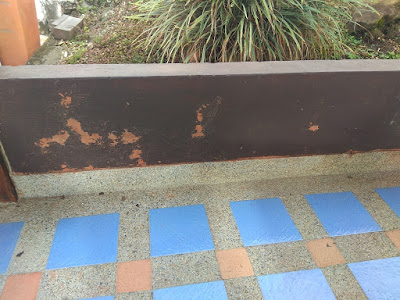 Out came the paint, and now it looks fresh, and another job off the list. 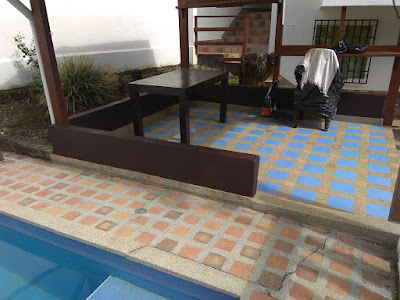 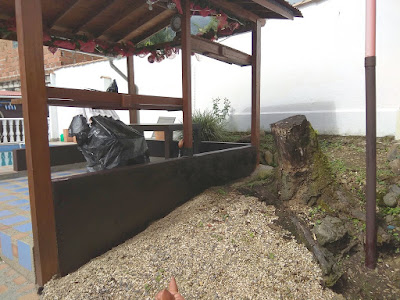 I also repainted the bottom half of the downpipe, this comes from the house gutter. Why is it in the middle of nowhere? because the gutter comes down the side of the house along the neighbours boundary, and then between the house and the perspex roof over our staircase, there is nowhere else it can go.

One day, I will have to buy an extention pole so I can use a roller and paint the top half...maybe!

Originally the Father-in-law was supposed to be staying with us until New Year, and the Mother-in-law returning here for New Year, but they have made up with their younger Daughter, or rather she has made up with them, after outrageous accusations, so they are going there for New Year, I will run him over there tomorrow, which is fine, but caused a fallout here last night, when it was suggested by Marcela, that Henry might take our booze with him...no that isn't going to happen, it can stay until he comes again. He is goinng to the Sister in laws, it's up to them to cater for him, if they were penniless I might have considered it, but the Brother-in-law probably earns as much as I do in pension, he just keeps it to himself...their problem, I don't think I am being unreasonable, I am certainly not a charity case.
By Phil Sale at December 30, 2017