After things had settled down with our neighbours, it looks as if we are having to resort to legal avenues yet again.

Our neighbout Jorge, who had a storeroom, that his family converted into a three storey building, with storeroom below and apartment above, not built to regulation, he was legalising it, we had come to an accommodation with him, but he was still at war with the family on the other side, so decided he wanted to sell up and leave. 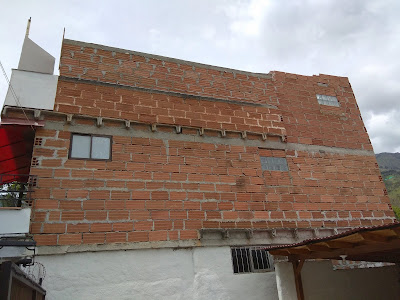 Unfortunately, the potential buyer is the owner of Agro Zarzal, the property on the other side of us, that was built at the beginning of last year, and whom we had no end of trouble with.

The property still hasn't been legalised, but yesterday Jorge moved out, and today the 'new' owner, or he believes he will be, moved his builders in, they removed the roof and started building up again, despite the Town Hall, stating the limit, Marcela spoke to Jorge, who believes they were already at that limit, but told Marcela that Oscar, the 'owner', will do as he wishes, and wont seek permission.

The third storey is technically illegal, as in rural areas, only two storeys are permitted, it is supposed to be a patio only, however I discovered from the builder that he intends to roof it. 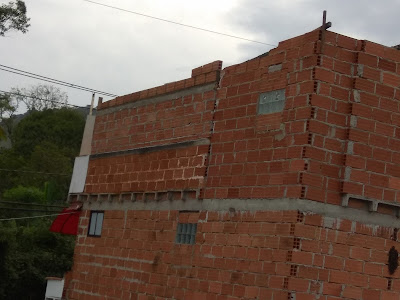 Marcela has spoken with the Planning Dept. who are fuming, and state they are considering halting the legalisation process, because the conditions have not been complied with along the way. They have asked us to submit a letter of complaint, which I had already prepared for Marcela to look over, and they will take steps to ensure the regulations are complied with. However, I won't hold my breath, because a back hander along the way, in the right quarter, and the file will disappear, there again, we may be surprised, and they do their job.

It's looking like another stressful time ahead!
By Phil Sale at January 22, 2018