As I stated, I went over to Bello this morning to work on the house. 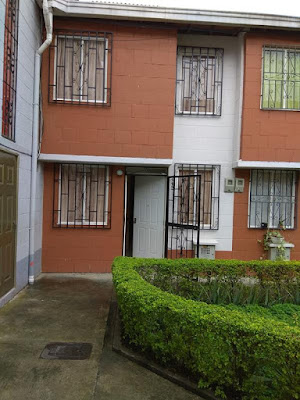 The front door is metal,  the outside was covered in rust spots, but all did not go quite as planned!

I spent a couple of hours sanding down both the outside and edges of the door, as well as the frame with wet & dry. 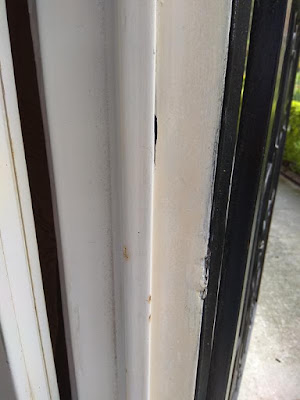 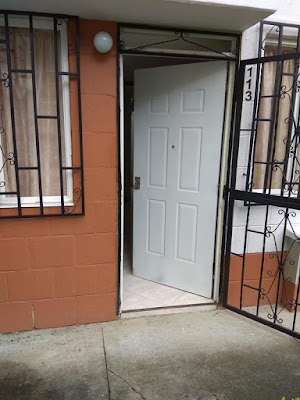 You can see how it has yellowed, and the rust spots on the photo above,

The photo on the right shows the door after it has been sanded, but before painting, I rather think that people have opened the door with  their feet a few times, looking at the bare patch at the bottom of the door.

Because the weather was rubbish, I had changed my plans, I was only going to prepare the door for painting, but it dried quickly after the sanding, so I decided to get the job done.

I covered the lock fitting and the spy glass with tape,  then the back of the door with plastic sheeting, crossing the hinged area to the frame, so the spray wouldn't go into the house.

I then opened my first can of spray, only to find that either someone had stolen the nozzle, or it had been omitted at the factory, so with some trepidation, I opened the second can, fortunately that was intact.

I checked that the wind was blowing away from the house, and started sprayiung, the first coat went on without a problem, but whilst I was doing the second coat, the wind changed, and I didn't notice immediately. As a result there was spray drift, into the house, fortunately the sofa is shiny leather, so I was able to remove most of it with 'desolvente' (white spirit), and the floor, being tiled, I cleaned, then mopped with disinfectant.

The Mother in Law was not at home, so now I am waiting to see if there are any comments or complaints!

As soon as the door was finished, I stripped off all the protection, before it dried into the new paint. 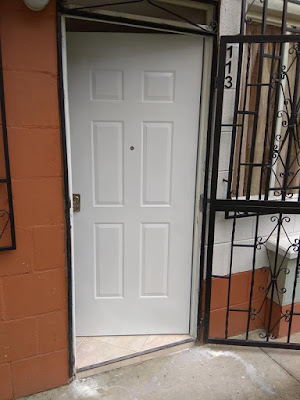 It looks almost as good as new, the white on the concrete outside is from the sanding water, so will wash off... I had to leave something for the Mother in Law to do on her return!

At some stage I will spray the frame as well, but it cleaned up quite well, and is not urgent, the next job over there, is to fit architrave around the downstairs door openings, something the joiner never fitted I presume to keep costs down.
Posted by Phil Sale at 18:19