Back into the Thick of it!

On Sunday, Marcela discovered that she had a problem with her handbrake on the Logan, she took it to a mechanic whilst she was out, who said one of the cables had snapped, but the 'brake guy' was out, so I suggested she contact Javier, our mechanic, as a result we took it yesterday morning for new cables, but he rang shortly after our return, to say, the cable had just come out of it's housing, it was not broken, however he had found that the brake wheel cylinder was leaking and needed replacing, so we told him to get on with it, and later I took Marcela back to collect it before she went on to work.

Last night the gate bell went, and it was one of the three witches who live below us, with a copy of a 'Demanda' stating I had to attend a conciliation meeting at the Town Hall Inspection of Police (not sure why it is called that, it is nothing to do with the police, it is just a Dept that enforces Town Hall rules and regulations) on March 6th, it didn't say what it was about, so I asked, and she said it was to do with their cars.

This is strange, because although I have complained to the town hall regarding parking in general on our stretch of road, I have made no particular complaints about these neighbours, mainly because I know how vindictive they can be.

Anyway unbeknown to me, when Marcela left work, she went to see the three Witches, mum and two of the Daughters, and asked them what it was about, apparently someone, has phoned the Transito (Traffic Police) twice recently, and asked for a Grua (breakdown Truck) to come and remove their two cars, which were causing an obstruction, fortunately for them on it's arrival, their cars were not there.

As a result, they spent two days trying to find out who had made the calls, as they believed they were malicious, and because they couldn't establish the source, they put two and two together and made five, thinking it had to be me, so they made the 'Demanda', without any evidence...I have to say that I am not guilty, because unlike Spain, where people took the time to listen to you, here they don't, and no one understands me, unless we all talk slowly, so there would have been no point in me phoning anyone, all my communication is written. The Mother admitted that she didn't understand me, and Marcela said she would speak to them again, once she had spoken with me.

The family also said they were going to stop myself and a neighbour accessing their lane to cut our hedge, by installing a gate to close it off, but they didn't want the hedge growing out into their lane, or they would issue another 'Demanda', that really leaves only one option, to extend the white panels right along the fence line, which will look fine, but be costly, still once it is done it should make things easier.

This morning Marcela went back to see 'Mum' witch, she accepted the explanation, and said they would try to cancel the appointment, if not they would see me at the office on March 6th...and will they be in for a surprise, as soon as they admit, they have no evidence it was me that made the calls, I will inform them that I will be going into the City to the Fiscaleria, to take out a 'Demanda' against them with damages, for defamation, the difference being, I shall donate any money received to the local school.

First thing this morning I had my annual prostate check, I had the blood test a couple of weeks ago, which came back well within limits, today was the undignified but necessary physical check, again all was well, so that's something else to cross of my 'To Do List'.

Back home and it was gardening time, I was going to cut the grass, but the brushcutter refused to start yet again, so it looks as if it will be visiting the garden machinery engineer tomorrow, I had also planned on trimming the inside hedge, but in view of the new arrangement in the lane, I decided to go further, and cut off any bougainvillea going through to the other side, I got ripped to bits. 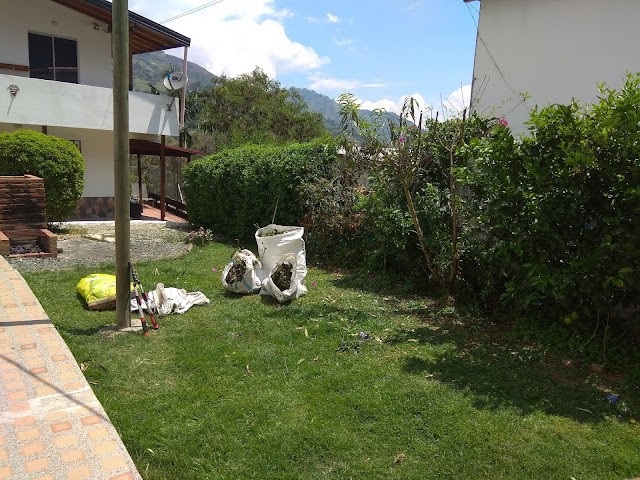 That done, it was time for a shower and lunch...that's the beauty of being retired, my day is done!
By Phil Sale at February 27, 2018