Getting Back to Normal

Firstly to update on the Town Hall Inspection, they came yesterday afternoon, it was lucky that I was in. It looks as if the Inspection has gone in our favour, the Inspector said that she was recommending that the whole top floor of the neighbours building has to be removed, and they will not accept the windows being replaced by glass bricks, they have to be replaced by brick blocks, they are also recommending that the balcony that was built out over the road be removed.

The Inspector, was very formal, and friendly at the same time, she said that no one was above the law, and that because this man had money, he needn't think he can do as he wishes.

Unfortunately her report now goes to another Inspector, who was previously dealing with this, so the outcome is still a long way from being guaranteed, we will have to wait and see. Our only concern now, is the reaction from this lout who is causing the problem, despite his outwardly superior behaviour, he mixes with the druggie set, he rented out the bottom floor as a Barbers, there is a lot of coming and going on motorcycles, but no hair being cut, maybe one or two a day, and what barbers shop is still open at 11.30pm? The last couple of days druggies have been seen using the apartment under conversion above, so maybe that's being turned into the local Drug house, if so I will be making a report to the Drug Squad in Medellin, I certainly wont be bothering with the local Police. Our concern therefore is that once this man sees that his intimidation hasn't worked, a hit will be arranged, it might sound over the top, but when it can be done for 100,000 COP (£25/$35) maybe we should get in first!!

Today I have composed another report, as the building in question does not have a septic tank, or the room to install one (all water grey and black is piped directly to the stream, which is illegal).  Originally it was built as a garage for a car owned by a woman who lived further up the mountain, who had no vehicular access, tomorrow I will be going into the City to register this with the Government Dept. that deals with all things 'ambiental'.

This morning I started by cleaning bathrooms and mopping, then loading the washing machine, after which I moved into the garden 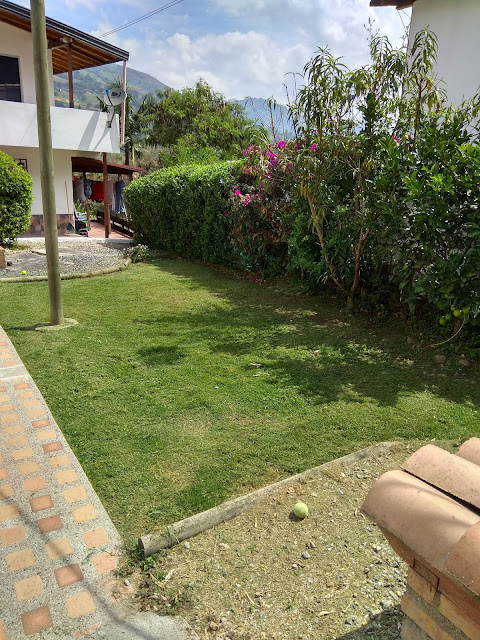 Firstly the lawn had a trim, and then it was hedge cutting, it just needed tidying up, so didn't take long, after which it was out into the road. 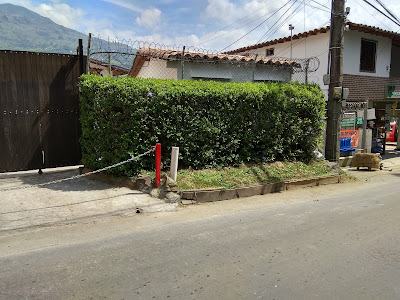 and give that hedge a trim as well. That done, and the mess cleared up that was my contribution for today.
Posted by Phil Sale at 12:32