Another Project Bites the Dust!

This morning we got underway at 8am, as the neighbour had opened her gate and gone back to bed!

The situation when we started this morning was that after yesterdays work, we had about two thirds of the wall left to do. 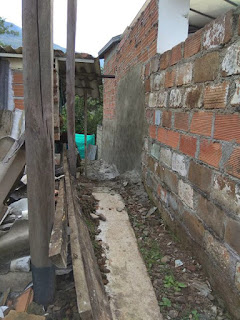 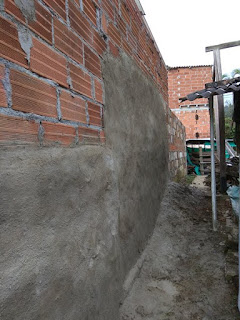 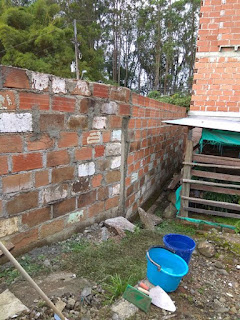 I thought we might get most of it done, and I would have to finish it off on my own next week, but for some reason it went smoothly for the most part, we were stumped, when doing the wall behind the garden shed, because we couldn't get a ladder in there, and the overhang from the roof itself meant that we couldn't render to the top of the wall.

Also we found another major fault with the wall, the course above ground level on this side, had parted from the course below, I cleared out the mortar, and could shake hands with Henry when he was stood by the swimming pool in our garden. I believe it was only the columns on our side holding the wall up...frightening.

we cleared out the worst part of the joint, hoping the wall wouldn't collapse, and fortunately it didn't, so I pointed from the neighbour's side first, then we continued rendering.

We had finished the main stretch, of wall from our house to the garden shed. 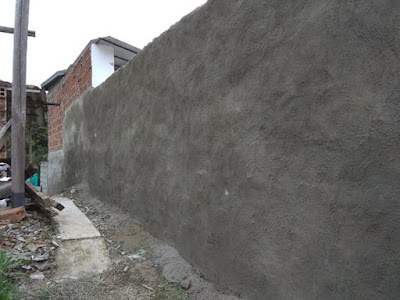 Then we had to take buckets of mortar behind the shed, which slowed us down considerably, thank goodness Henry is slim, I was having a problem working that area, so Henry ended up doing most of the work here. 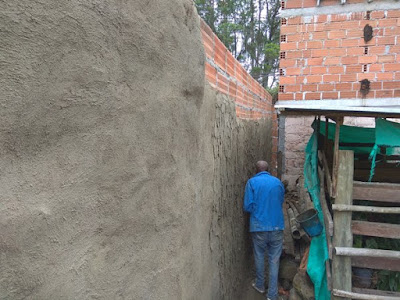 He started at the far end, and I worked in from the garden, I would like to say that we met in the middle, but it didn't quite work out like that, and by this time, my knees and spine were giving me hell. 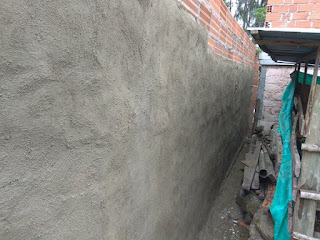 By this time it was about 1.30pm, so we washed what I no longer needed, then had lunch in the gazebo, so that I could then continue running repairs on our side of the wall.

I chiseled out the rest of the crack, and then pointed our side of the damaged mortar joint and also the crack running up the wall through the bricks. I still believe that the problem was caused by shoddy building work, and mixing different reclaimed building materials. Hopefully the wall is now reasonable stable. 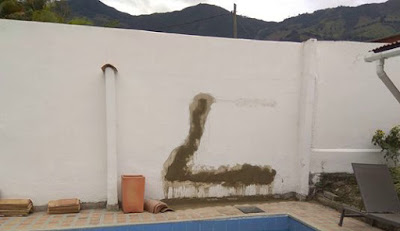 I still have other repairs to do on our side, including up the side of the pillar to the right of the photo, but that is for another day, by this time Henry was already on his bed having a well earned siesta, and I was ready to finish cleaning up, have a shower, and go to my bed, but before I did, Marcela sprayed my back and knees, in the home, that I would be able to move when I got up, which I was...with assistance!

I think tomorrow I will be moving like a robot, if indeed I can move at all. But that is another major project off my list, I only have to return sometime and barrow in a load of gravel, I promised to put along the wall, so the neighbour can walk there without walking in mud, which she does at the moment.
By Phil Sale at March 30, 2018