There is a piece of my fence that borders the road, that until recently has been covered by the azulina hedge on the road side, but with the work I did in the lane alongside us, I cut all the azulina down from the side of the workshop, where it was growing along the fence, and also up into the roof. As a result it is looking a bit sparse, and would be better if it was removed altogether. 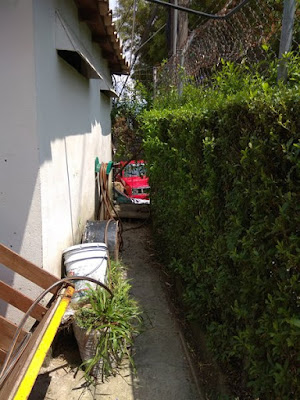 At the moment people can look in, they can't see much, but it does diminish our privacy, at the same time there has always been a space at the bottom, and a platform, where the boys can sit and keep watch, especially when we are out, and I don't want to block that off.

I couldn't believe it, this morning I went off to Niquía, to Homecenter, but they had no construction grade timber, which is what I wanted, so on the way home, I stopped at 'Madepino', a timber Merchant, which sold rustic pine as it's name implies, only they no longer sell pine... totally deflated I returned home, thought about it, and set to work.

I decided to use more mahogany left overs, only now the stock is nearly depleted. I cut the parts, the section of fence is only 60cm wide, and with the space for the boys to view out, doesn't have to be very high, I wanted all the parts to have an incline, so water would not sit on any part of it, so I cut a 25º angle on the cross braces, and then using a pencil tied to string, with a nail at the other end, I drew an arch across the top, which I then cut on the band saw. 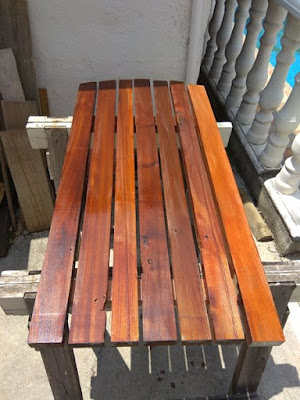 It was then painted, with preservative I had in stock, and screwed together. 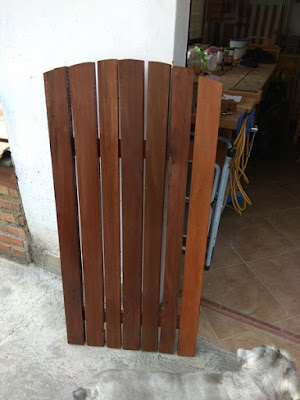 Tomorrow, I will cut away the rest of the hedge, and install the finished fencing!
By Phil Sale at March 21, 2018