Preparation For The Next Project

This morning, I headed off to town to buy in groceries, thinking wrongly, that the end of this week was Semana Santa, no it's next week, Oh Dear I am definitely losing the Plot, it doesn't help that we had a National Fiesta this last Monday, that threw me out to start with!

Back home, I decided to prepare for my next project, one that has been waiting around for over a year, not all of my doing, although I haven't exactly pushed to get it done. 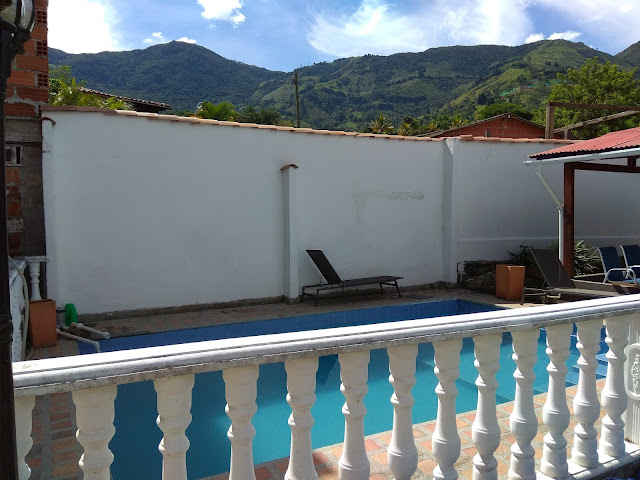 The wall!, looks, great, but every year the cracks get worse, despite annual repairs, and it wont get any better, because the other side of the wall is not rendered, in fact the previous owner of our finca, threw up the wall in a day, when the neighbour was out, so it is not only, not rendered, it wasn't even pointed, as a result, any small movement in the ground results in big movements in the wall. 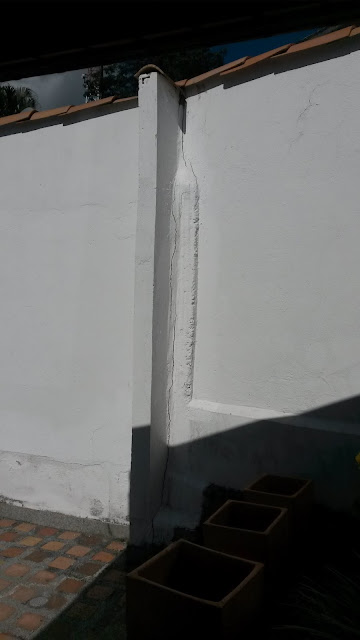 One of the worst places is down the side of this pillar,  the reason being,it is in effect two walls, they are not tied into each other, and at times, the crack is wide enough to see through. I am never going to resolve the problem completely, but by pointing and rendering the other side, it should certainly help, the only real solution, is to rip the wall down and start again, but that isn't going to happen.

Unfortunately, I have been hampered in this project by my neighbour, when we  moved in, she was downright hostile, because of the attitude of the previous owner, but we sat her down, and I told her, that I was not him, and as a result she is now 'a friendly neighbour', but, she is still not keen to give me access, however she has said that if we arrange it, she will give me access when either she or her son are at home, which is probably the best I can do.

My rendering will be much the same as the garage, rustic, I neither have the patience nor talent to make it look like this side,, but then if it is rustic, any future repairs will blend in, and not stick out like a sore thumb.

So I went to AgroZarzal, and bought three sacks of cement and 30 of sand, to start me off, I don't think it will be anywhere near enough to complete the project, but at least I can get going. 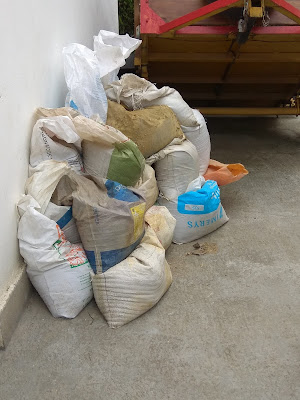 However, my plans were delayed slightly this evening, when I received a call from Henry (Father-in-law) to say he was coming for Semana Santa, and when he heard about the project, he 'told' me to wait, and he would give me a hand...

Two pairs of hands are definitely better than one, although I know I will have to suffer as a result, because if I work alone, I just work mornings,and rest up in the afternoon, when I work with Henry, I think it will be all day, and even wearing a support, I'm not sure how I will cope with that.

Marcela is going to try and make the arrangements, so I'll just keep my fingers crossed, that I can get it done.
By Phil Sale at March 20, 2018