This morning, surprisingly, I had little trouble getting out of bed, all this work must be rejuvenating an old body... OK, I'm not even trying to kid myself on that one, but it was certainly a nice surprise.

After breakfast, I shot down to Copacabana to do the shopping, before we started to get ready to go on an adventure tour. We have just had an early lunch (11.30am) and now we are going to visit Henry's elder Brother, his brother's son and their respective families somewhere between Giradota and Barbosa, it's only about 30 minutes away, but as we have no idea where the house is, we are meeting up with them, and will follow them to the house (Henry's Nephew).

I think I will just be sitting on the periphery, as they catch up, the last time Henry saw his brother, who lives in Choco, was forty five years ago, that leaves a lot of catching up to do. 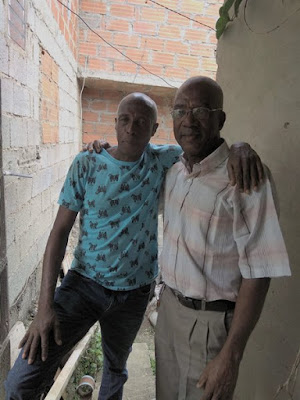 Henry (left) finally met up with his brother, Telmo, who was not as old as Henry thought, only being 66 and not 70, hahaha!

There were a number of family members there, and I still haven't figured out all the relationships, but they were all very welcoming, and I wasn't made to feel like an outsider. It was a typical Colombian get together, music and singing.