Two Jobs in One!

After Marcela left for work, I got stuck in to installing the mahogany fence panel, but it was no easy job, it was exceedingly heavy, and I needed someone on both sides of the fence.

The idea was to wire it to the existing mesh fence, that meant feeding the wires from one side, and then feeding them back from the other side.

I propped the panel up on wooden blocks, once I had it in place, and the wires fed through from the inside, I then stepped back, and crack... Yes. I had put my foot on the outside garden tap, and cracked the feeder pipe, my first shower of the day! I went out in the road and turned off the water, whilst I continued with the fence panel.

Eventually I managed to get the panel wired to the fence, top and bottom, the dogs were getting really annoyed, because they wanted their spot, and couldn't understand why I kept shooing them away.

That done, I turned to the damaged water pipe, hoping I had just cracked the neck, and not broken the pipe underground, it looked as if it had just snapped up near the tap.

I needed a foot of 1/2" water pipe, unfortunately I had none, so had to go next door and buy a six metre length, and the fittings. I cut the foot I needed, then cut the remainder into two, so it would fit in the workshop.  I glued the fittings to the new pipe, cleaned the old, having cut that so it was ready for the new joint. All was joined together, and left to set, I then installed the old tap, and gingerly turned on the water...Bingo!, no leaks and working fine. I then drove in a length of rebar, alongside the UPVC pipe, and wired them together, hopefully now the tap with survive a little longer. 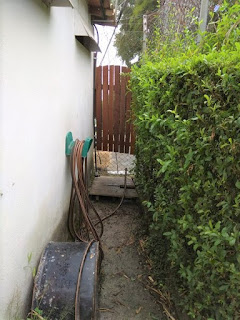 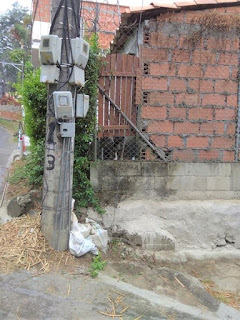 It didn't take the boys long to retake their position on the platform, and don't seem to have noticed any change.

Just to be sure the wires don't rust and snap, bringing the whole panel down squashing the dogs, I intend to put two strip of timber on the outside of the fence, screwed back into the supporting struts of the panel.
Posted by Phil Sale at 13:03