Sunday was a washout! summer is definitely over, we are now having daily Tropical storms, grey and wet, at least it is still warm, it is just a pity I haven't come across spectacles that make a grey sky look blue, then I would be a lot happier!

Monday morning Henry left with Marcela for Bello, he was going to spend the night over there, after seeing his other daughter and Grand-son, as it was easier for him to catch his bus back to Caucasia from there, however on arriving in Bello, his daughter said she didn't want to see him...a prize B++ch! she has cut herself off from all the family, and it was all her fault in the first place, apparently this time, she said it was because she was not invited to go with us and visit Henry's family, sorry, but she knew he was here, and made no effort to contact him at all. So Henry caught the bus back home at midday, as he had work waiting for him.

Whilst all that was going on, I did some housework, and then went out and put half the coping tiles (using roof tiles) back on top of the swimming pool wall, the rest I will replace once I have completed the repairs.

This morning, I was up at 5.30am, to take the dogs for a walk, and prepare the Birthday Girl's breakfast and take-away lunch! Yes, Marcela's Birthday, another year older, she seems to think that bothers me, but I wouldn't swap her for the world. We have planned to go out for a meal this evening, but on condition there is no tropical storm, not only is it stupid to drive in it, but Marcela doesn't want to leave Tito if there is thunder and lightening. 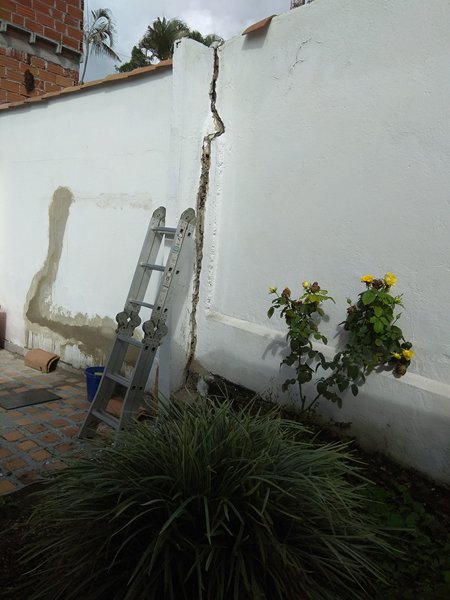 firstly, I had to open up the crack, I did this with lump hammer and chisel, after which I mixed up some cement 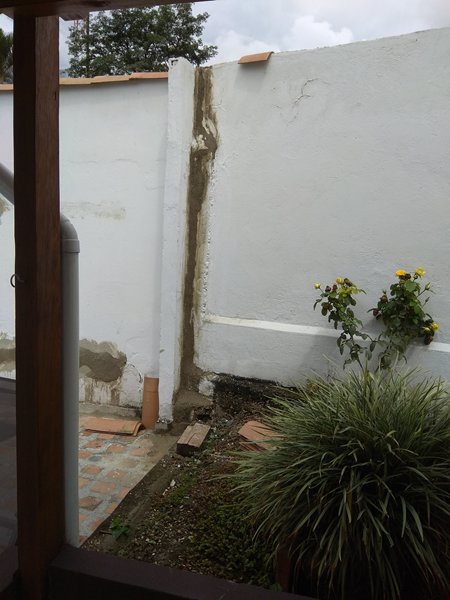 filling in the crack again, now I just have to wait a few days for it all to dry out, and then paint it.

That done, I loaded up the car, with all my buckets of brick ends, cement left overs, and stone, and went down the mountain to the worst of the potholes, and filled them in, compounding it with my sledge hammer.

One of the Locals, came down in his lorry whilst I was doing it, gave me a thumbs up, and ran his lorry over the rubble to save me a job!
By Phil Sale at April 03, 2018