Yesterday, I went out to do the food shopping, then went on to Bello, primarily to find some new wellington boots, I was fed up of getting bruised toes from wearing a pair that were too small, this is my problem here, no one seems to have more than a size 9 / 43 foot, but I did manage to find a 43 that I reckon was more of a 44/45, and they are fine, they also have steel toecaps, so dropping bricks will no longer be a problem either.

Whilst there, I also bought a trolley jack, which will make lifting vehicles and the trailer much easier at home, along with a new vacuum hose for the swimming pool.

Once home, I put away my purchases, then set to, cleaning the swimming pool, 12 change of filters later it was clean, and Marcela was home!

This morning, I went and picked up a friend, and we went to the Consejo in Copacabana for the meeting regarding the Town Hall grabbing our water companies in the surrounding mountains, 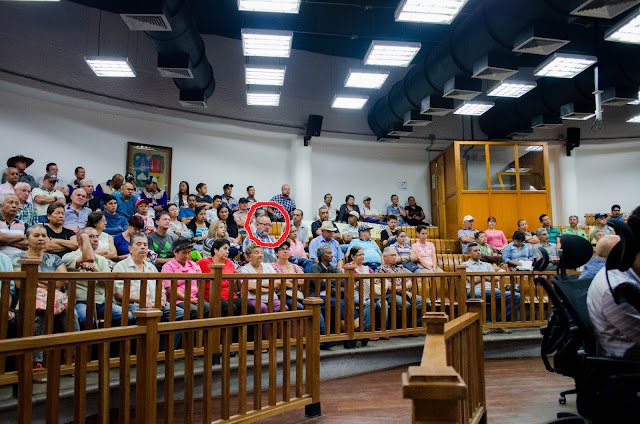 Just to prove I was there!


It was a full house, I went to put my support behind the local Community, not expecting to understand a lot, as they talk too fast, when it is not aimed at me.

We have  Consejal Hámer Perez to thank for the video, and for speaking up for the Community, he broadcast live on Facebook during the event, which went on for about 2 1/2 hrs. Marcela watched it all whilst working at the shop. Maybe it was just as well, because, obviously many of us didn't understand the outcome, Marcela informs me that the Mayor's mouthpiece, who spoke near the end, informed us that he had backtracked, and would no longer be seeking to  take over the Water Companies, with his plan for a Public Service Company, if that is the case it is a Victory for the small man.


However everyone I spoke to was still talking about attending the final meeting on Tuesday, so Marcela is going to confirm whether she is right or not.

The Consejales have now confirmed that the Mayor has withdrawn the Water Companies from his plan for a Public Service Company, which a indeed a Victory for the Little People, but we mustn't be complacent, he is devious enough to go for them at a later date.
By Phil Sale at April 21, 2018